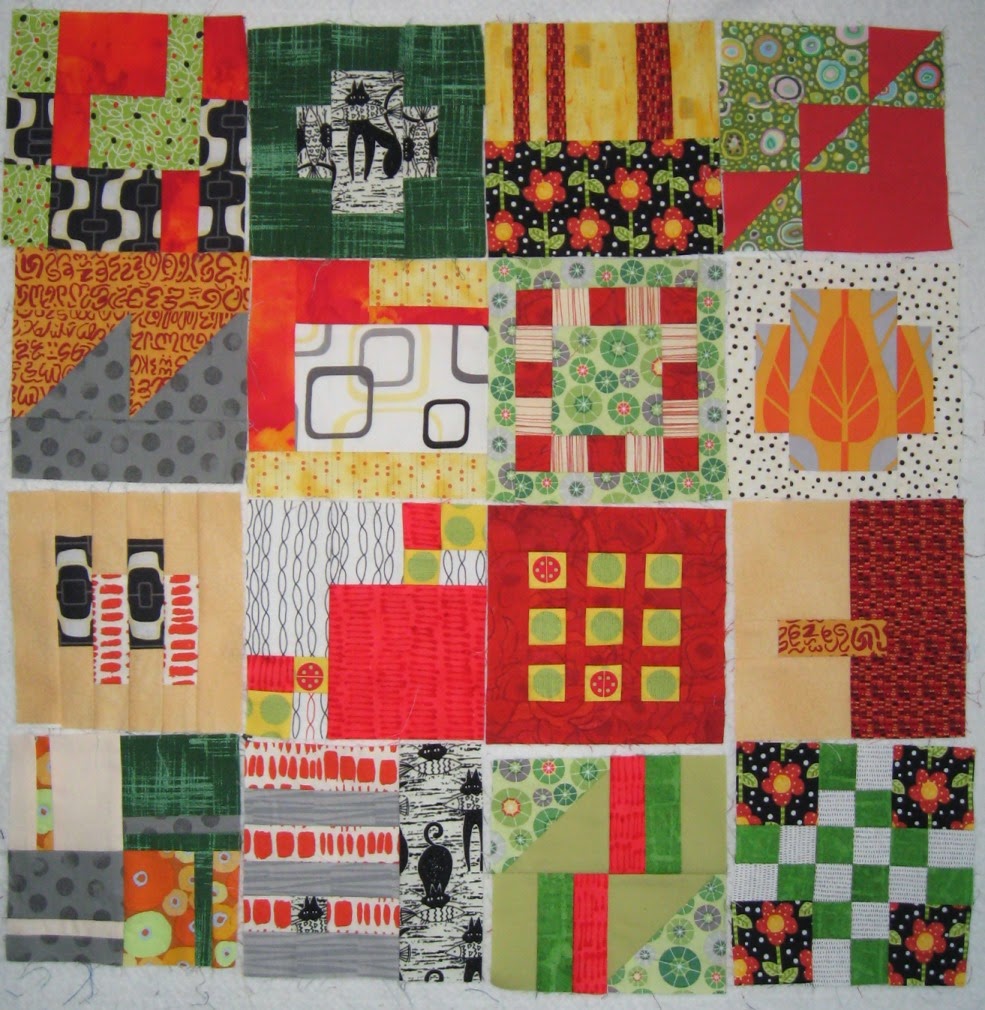 I haven't been doing a huge amount of sewing this week, but there are a few more "Tula Pink" blocks on the wall!  I've added a few more fabrics to the mix -- all from stash.  I don't know what it is about these, but they're addictive  and I think it will end up being a very happy quilt.

There's also been another jigsaw puzzle on the table. This is one I bought at a C&T warehouse sale years ago -- a Ruth McDowell quilt -- and finally pulled off the shelf.  It was actually pretty easy, since I'm so used to looking at fabric and color. 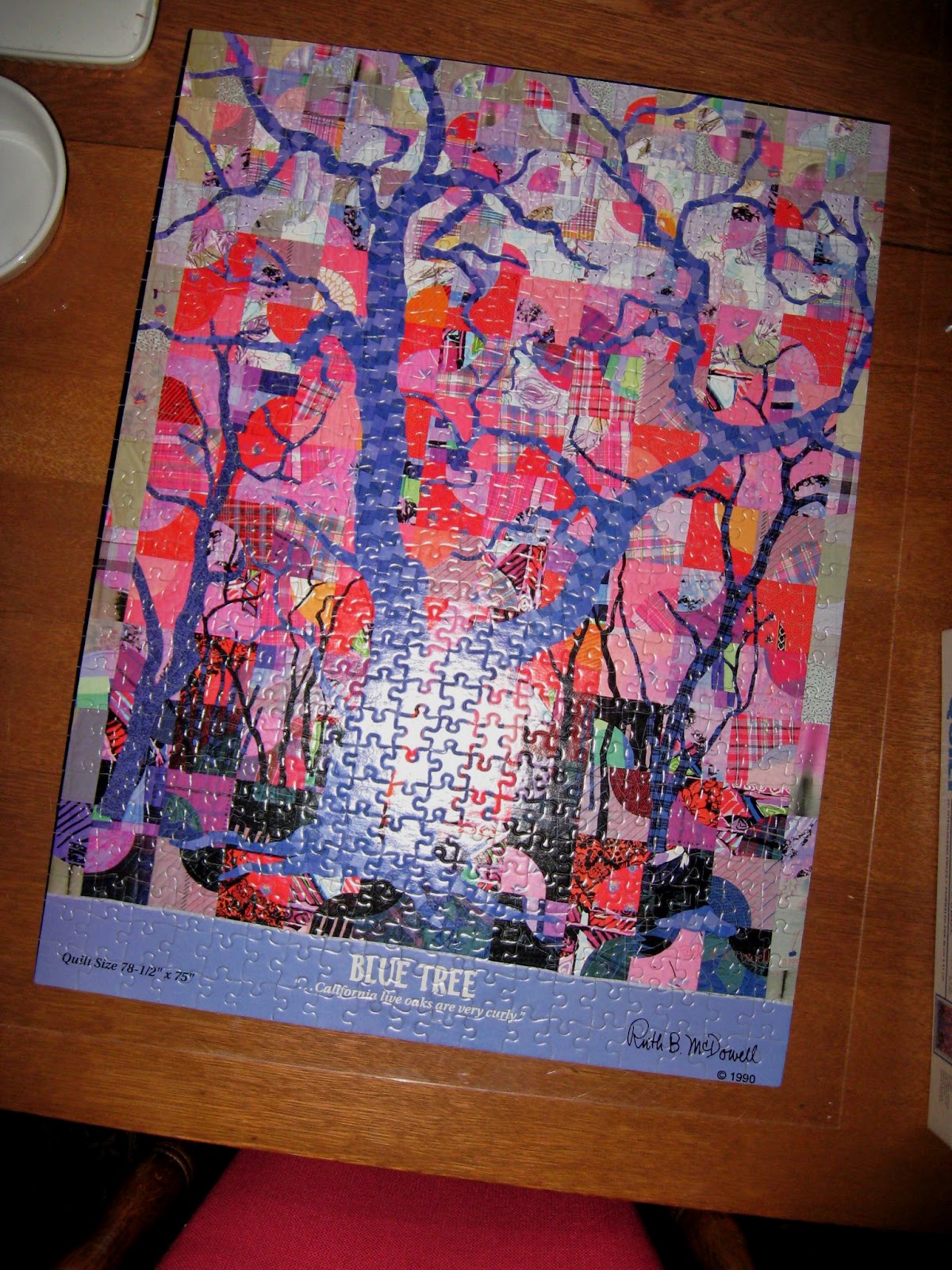 Last year there was a bit of a kerfuffle towards the end of the Cotton Robin, when one quilt took the very long, scenic route from Canada to New Zealand (I think I've got the facts straight... I sort of blocked it all out once it was over!).  Halfway into the 6-week trip, I decided that we should make a new quilt for the person who was missing hers, and Sandra (with no blog) kindly sent me a new center block.

Before the replacement project got any further, though, the missing quilt arrived (yay!) and some of the robineers decided to take the extra center block and make me a quilt -- I had never had anyone make me a quilt, so I agreed, expecting a "cotton robin" sort of 20-inch quilt.

So, imagine my surprise when I opened the box that was waiting for me when I came home Monday night -- this fabulous quilt is HUGE -- about 70" square!  It was created by 11 lovely women and it is going to hang in my office to make my workdays a lot brighter. 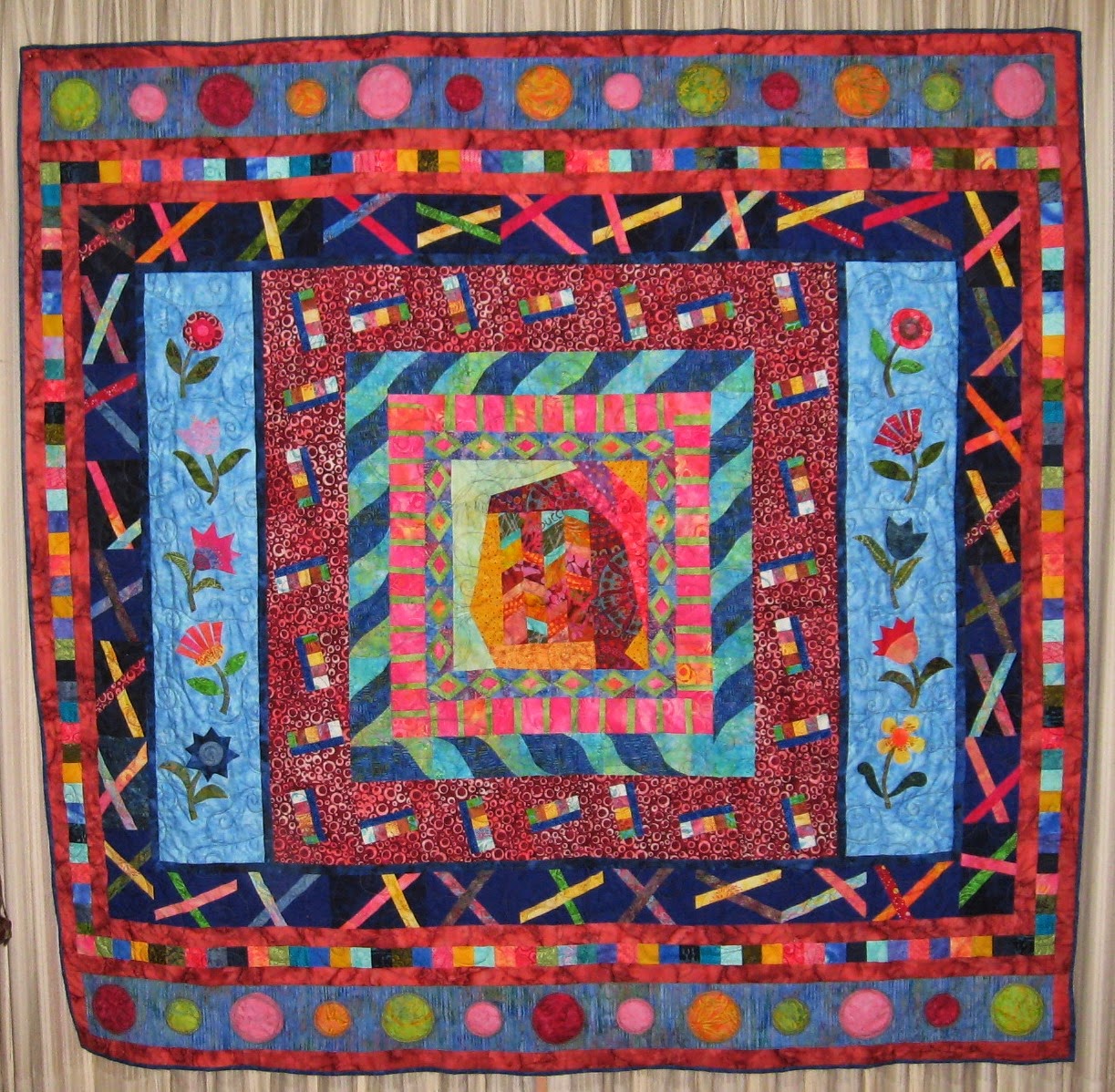 And in other news, I've jumped on the Tula Pink 100-Blocks bandwagon...  I had a small stack of fabrics I'd collected together a couple years ago and added a bunch more random stuff from the shelves and started a set of blocks. These are the first six -- there are four more now. They are truly addictive! 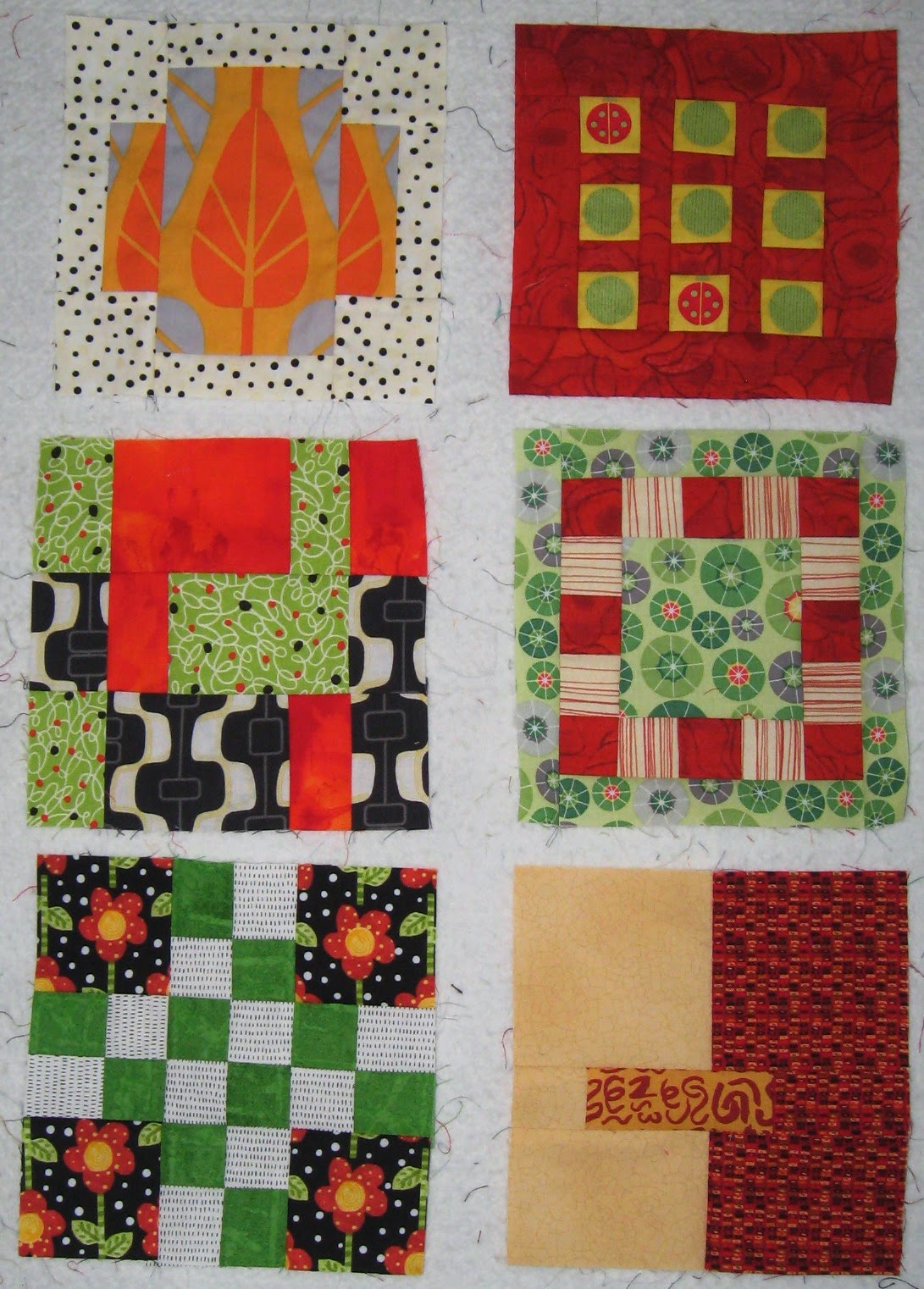 Finally (FINALLY) had a call from my doctor telling me that all my test results were fine. Thanks for all your good wishes after my freak-out post a few days ago...

more soon, I'm off for a good night's sleep!

Kate posted recently about her history with the Block Lotto, which prompted me to go back through the archives and count up how long I've been participating and how many times I've won blocks...its actually a pretty good record!

This was my first block and first win -- the double 4-patch, made in matching sets.  This quilt went to a local women's and children's shelter. 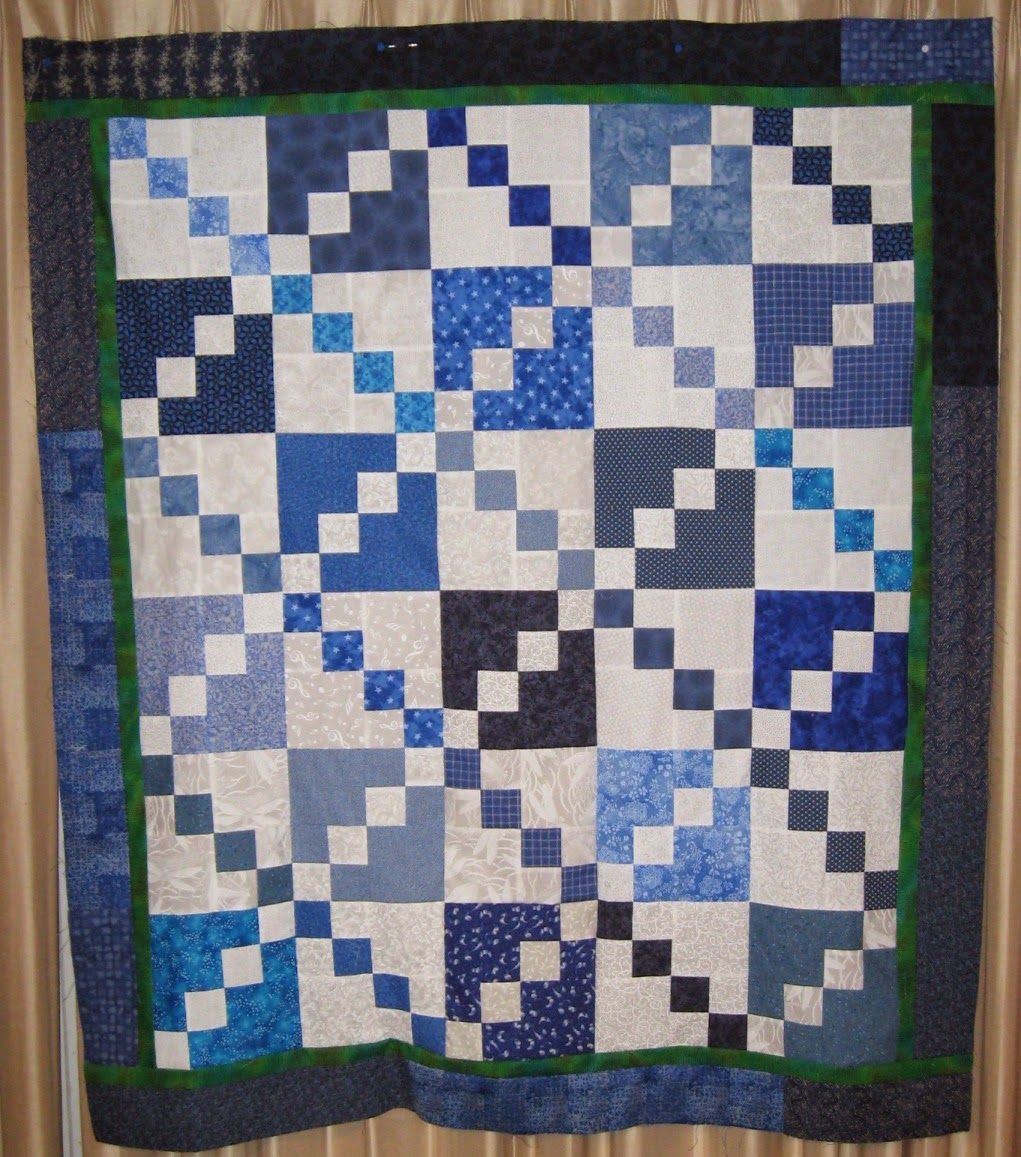 This was possibly my favorite win -- the Amish houses. The quilt is called "Spencer's Village, and it was gifted to one of my nephews 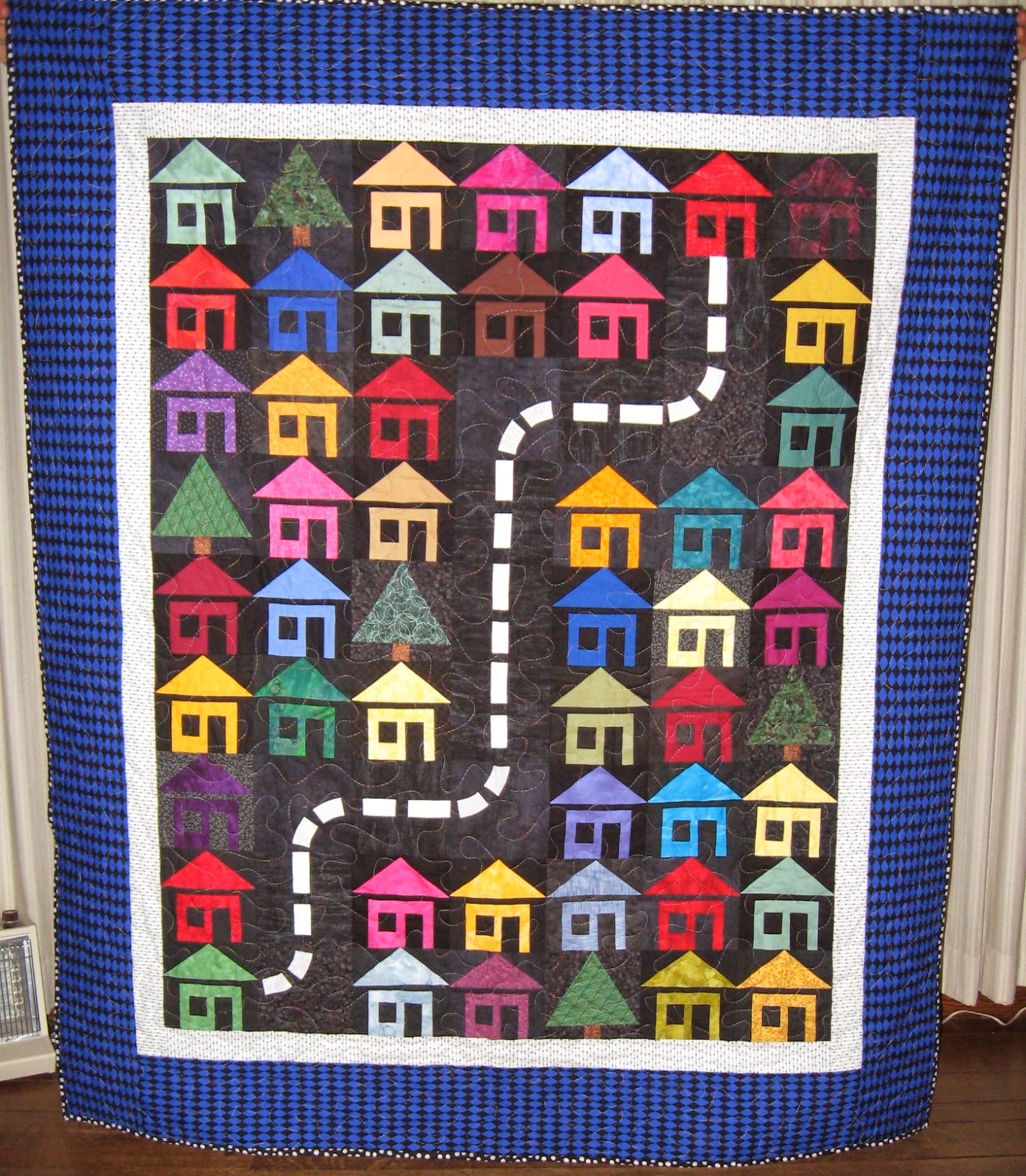 This block is called "Thrifty" -- not sure why! I used my winnings to make a "weighted quilt" for a young niece with a variety of disabilities, after reading that the weight (about 5 pounds, achieved with poly pellets) can have a calming effect and promote better sleep. In fact, she still sleeps with this 5 years later! 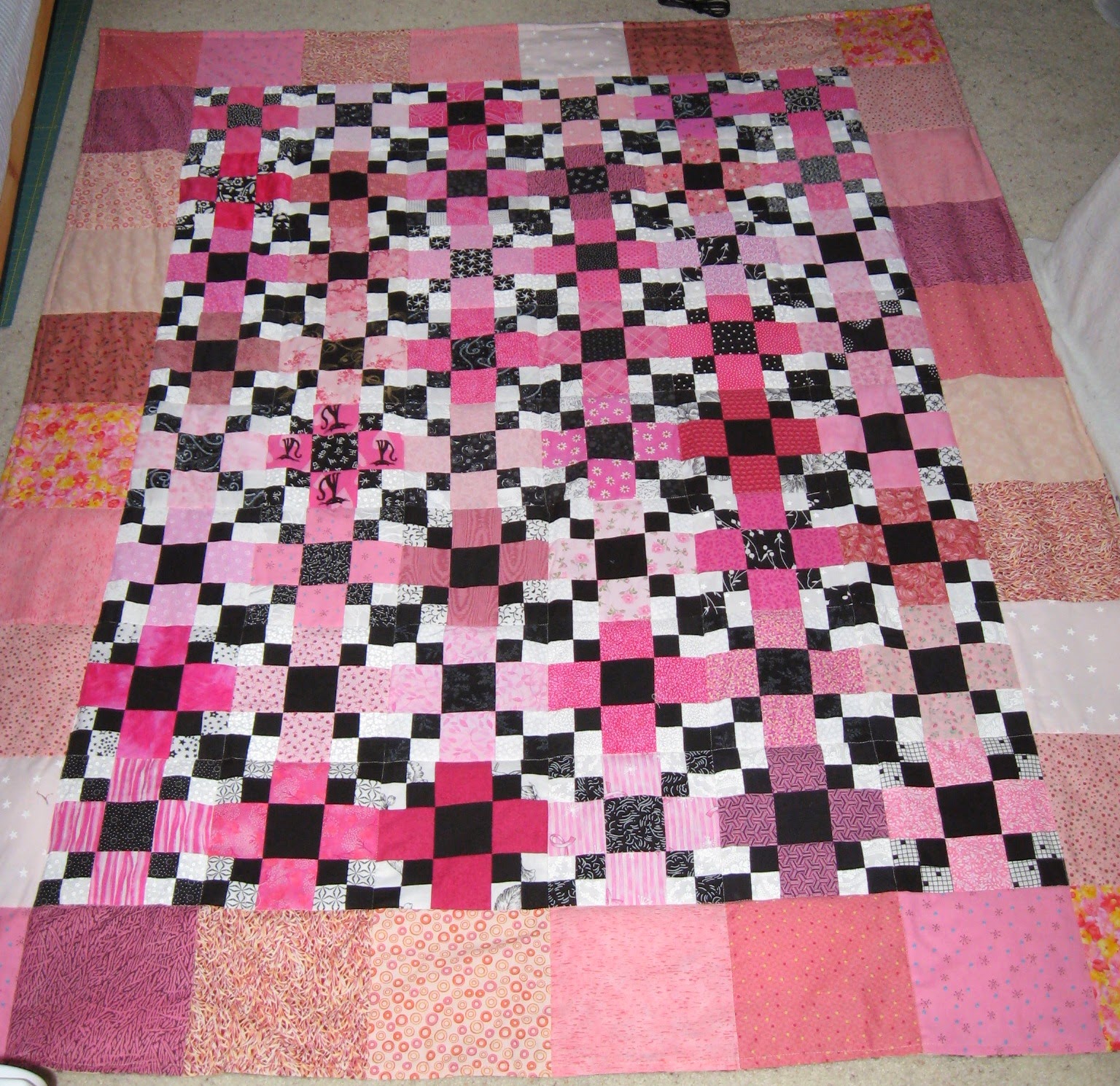 The free-style trees are another favorite.  I won these blocks in December, 2010 but the quilt has just gone to be quilted in the last month. 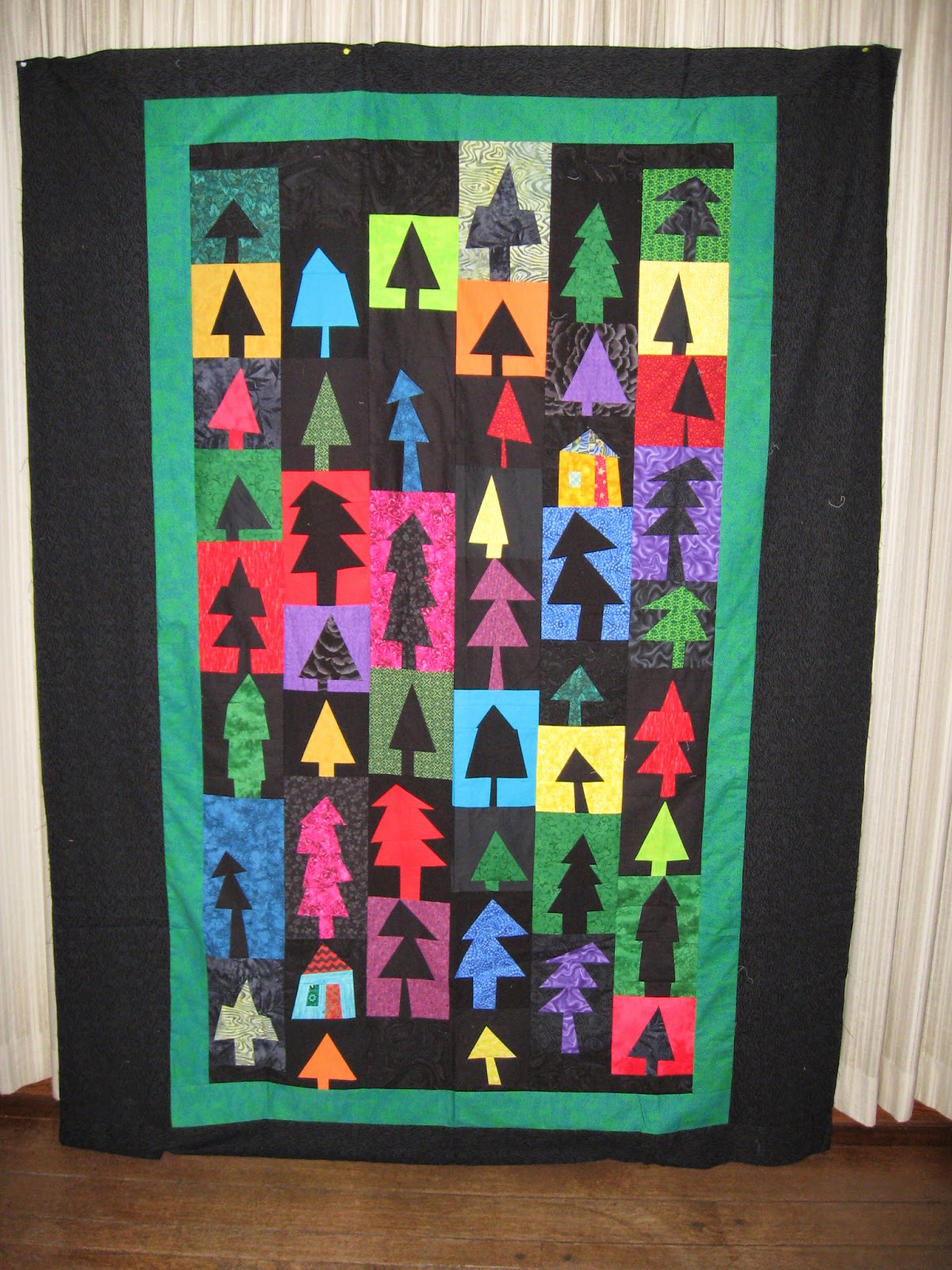 I won so many tic-tac-toe blocks in January 2010 that I was able to make two quilts -- these ended up going to my twin grand-niece and nephew when they were born in 2012. 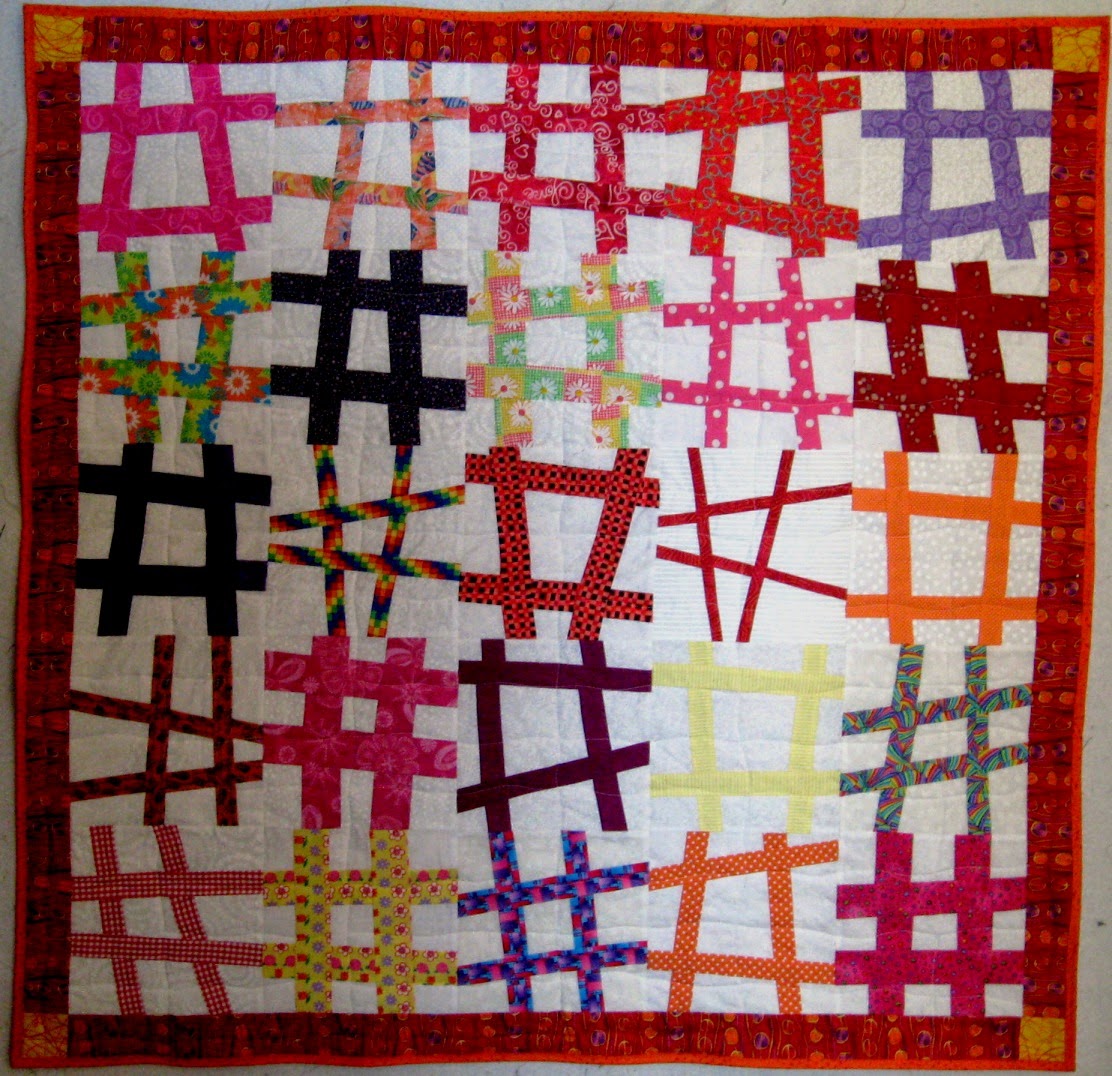 Last but not least, another pair of quilts were made from liberated checkerboard blocks that I won in 2011. One was gifted to a friend's new daughter, and the other to a children's charity drive. 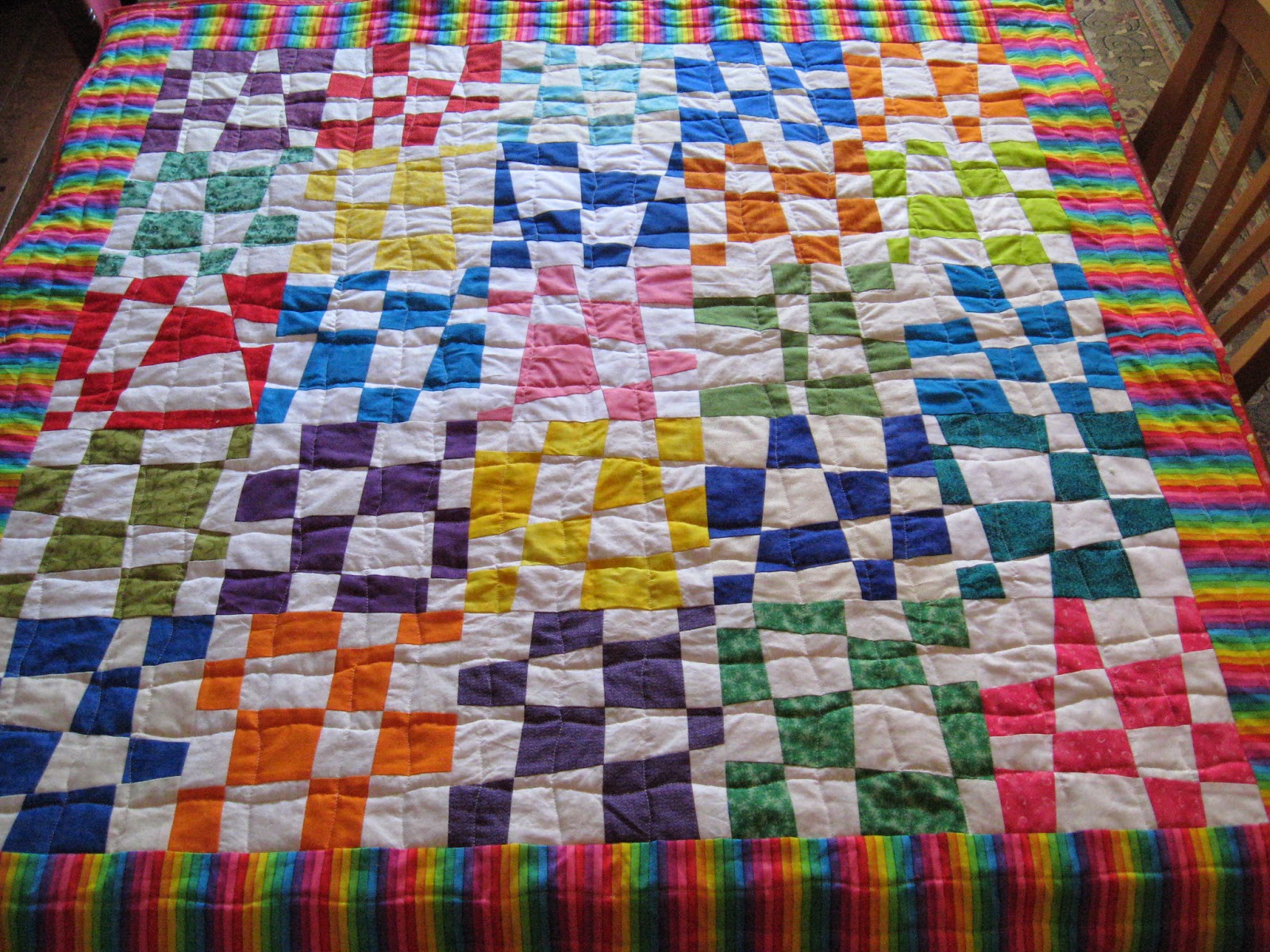 I hope you've enjoyed this little trip down memory lane -- and do check out the Block Lotto! It's a great way to use stash, try new things, and test your luck.

I am waiting for results of a couple of medical tests.  The answer could be not-so-bad, or pretty awful.  I'll have the results in a few days.

In the meantime, I am bargaining.  I should mention that I am not at all a religious person -- never have been -- and if pressed I'd probably have to say I'm an atheist.  But that doesn't stop me from bargaining with some higher power for good news.

Of course, I haven't really figured out what the bargain(s) should be.  A bunch of money to charity? Finally getting serious about losing another 20 pounds? Finding religion?  I just don't know...

I suspect that whatever the news is, I'll just deal with it.  (is there a choice?) But in the meantime I'm something of a jittery, unfocused, insomniac wreck. I'm not so much for prayers, but please think good thoughts on my behalf -- it can't hurt!