The race update: he's just about to cross the half-way mark, which means he'll be able to open the little box of goodies I assembled for him -- a tradition I learned about when he did the race two years ago.  This time I solicited cards and treats from some of his family members in Wisconsin, too, which will be a surprise. Our 5-year-old nephew sent a container of bubble soap -- I wish I could be there to see Al blowing bubbles from the boat!

In the meantime I've been pretty lazy here at home, watching too much junk TV and knitting away on the Through-the-Loops mystery shawl.  I'm a couple weeks behind on it, but hope to finish before I leave for Kauai next Saturday.

I also finished binding an old round robin quilt that was done in an online group I used to belong to -- I wasn't really excited about it at first, and had no idea how to quilt it. On a whim, I took it to show a local quilter, Sue Fox, who suggested a simple grid of slightly wavy lines. She whipped it out in no time and I think it worked perfectly! 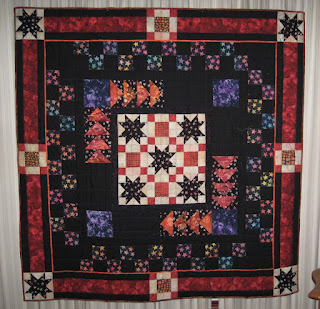 Here's a detail of some of the quilting -- hard to see on the black background. 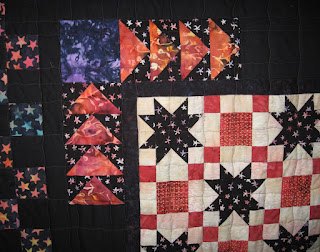 Congrats to your sailor hubby on the half way mark. What a fun idea to give him a half way package.

I like the round robin quilt. It reminds me of an old fashioned board game for some reason. I do like how the final border has expanded the original center blocks.

Great image of Al blowing bubbles on the boat in the middle of the Pacific!

Love the quilt...and the quilting. I need to get Sue Fox's number from you when I see you.

Love your sailing husband update!! Very cool!!! And the I like the round robin...I know, it sometimes has to "age" before getting finished!!

Perfect round robin quilt! Looks like it was planned.