UFOs past and future

Yeah, yeah, it's time to show off what I finished in 2011 and confess to the ridiculous number of unfinished objects that remain.  All of the photos below are quilts that I finished except the "red squares"  which I donated to Blankies for Grownups as a flimsy for someone else to quilt. Three quilts were sold, two were gifted, and two were swapped. 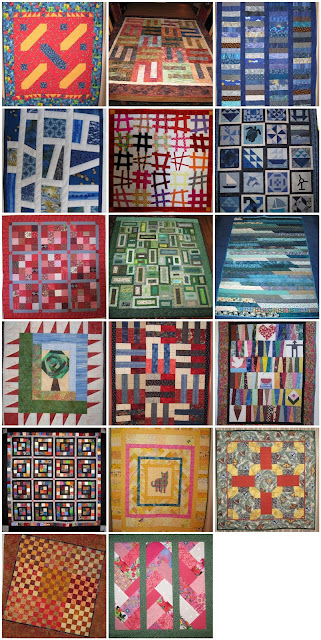 Wow -- that looks insane when I see it on the screen!  I might have to rethink this...  maybe a virtual garage sale?

I love your idea of a virtual garage sale! Maybe a bunch of block lotto folks would like to participate. We could set up a separate blog for the virtual sale and have UFOs, fabric, tools, etc. Who knows how big it could grow?!

Very impressive! Some beautiful work here. I hope to do better next year.