Somehow I've been out of a quilting mood lately -- maybe it's my obsession with Angry Birds or something.  So here's a few random (mostly non-quilty) things to share... 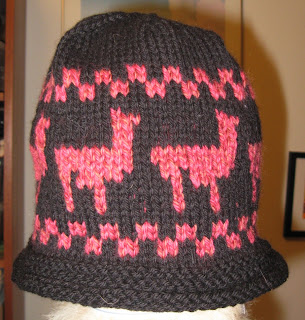 First up is a Marching Alpacas hat that I made for my sister, who lives in Tasmania and raises alpacas along with a number of other beasts.  I actually made two of these, because the first came out too small for an adult head -- it will be gifted to my youngest niece for the holidays.  (pattern free from Ravelry)  Now she tells me that the next hat should have pigs on it! 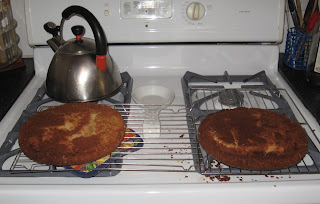 Next is true confessions of a pathetic baker: honestly, I DID grease and flour these cake pans but the layers just refused to let go!  It's a banana cake I made when my oldest nephew and his new wife came to dinner last weekend. It turned out pretty yummy anyway, and the messed up parts were hidden by blueberry jam between the layers.
I gave the newlyweds the quilt I made (shown here)  and got the strangest response -- usually when you give someone a quilt they immediately open it up and look at it.  Not these two. It was folded up, and she sort of gingerly opened one corner and folded it back, and another corner... and admired the batiks... but never looked at the whole thing!  I know she appreciates quilts because she told a story about a quilt her grandmother had made her years ago, so I don't feel bad about the gift but I still feel funny about it. I guess I just don't know her very well. 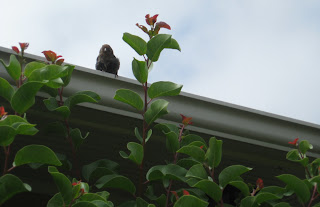 And one more California Towhee picture -- whenever we sit out on the patio they hang around keeping an eye on us and cheeping. This one looks like he's trying to be a vulture!

Nice hat! A pig one would also be very cool.

That is a bizarre response for sure. Maybe she was somehow embarrassed about opening a gift?

Anyhow, I hide a multitude of cake baking sins with frosting. I bet your cake tasted great!

I enjoyed reading your articles. This is truly a great read for me.