I'm still thinking about the borders for the purple/black & white diamonds so I decided to work on a couple of other quilting jobs. The first up -- smallest first -- was my Pink quilt for the rainbow scrap challenge. I did some wonky feathers in the braids and straight lines in the sashing. 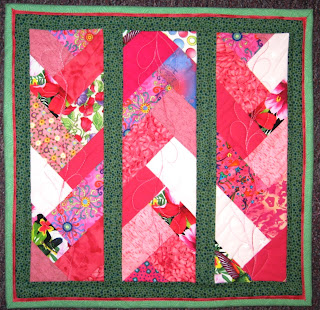 Then I decided to try a two-color binding technique that a friend had described: 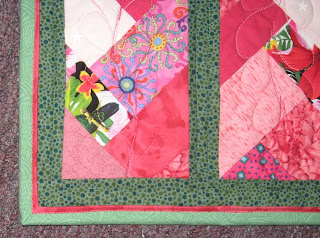 Basically, you sew two different widths of long strips of binding together, fold in half, and apply to the back of the quilt like regular binding. When you flip it around to the front -- voila! -- you have a narrow flange of a contrast color. You stitch in the seam between the two colors. Very easy, and I know I'll be using this technique again.

I had instructions in a commercial pattern from Barbs Elegant Designs, but I also found a tutorial here.

Sorry for the lousy photo quality -- I can't seem to get the lightest pink to not wash out without making everything else muddy.

Tomorrow -- a much needed cut & color, and hoping to get the teal strippy quilt quilted. It might end up with a two-color binding too...

I'm playing around with various fabrics to use for setting triangles around the diamonds.

This doesn't show up well, but it's a pale purple batik with little marks 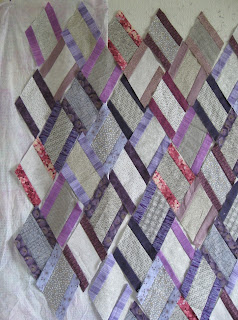 This is gray with white dots 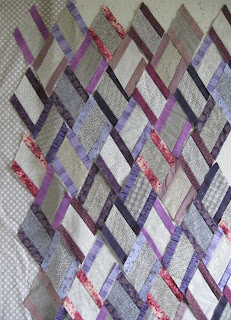 This is a black floral on white 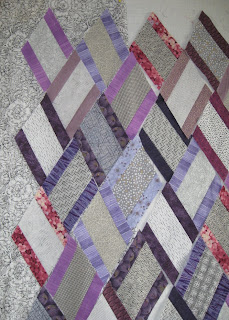 I was looking for something that would fade into the background a bit and blend with a few of the other fabrics... opinions?

Why do design walls always have to be on Monday? And why has Blogger started loading photos in random order? It always used to be that the last one you entered would be on top of the page, but it seems to be scrambling them now. Must have been the last "upgrade"...

Anyway, back to the wall. I think I have all the blocks done for this one, and now that I look at the picture I can see at least one area where I have some of them turned the wrong way. One of my errands this weekend will be to find something to use for the setting triangles -- I think it will be something black & white to sort of fade into the background, but I'm not sure yet. 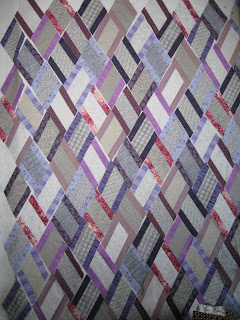 After I took the photo this morning I looked out the window and saw this: 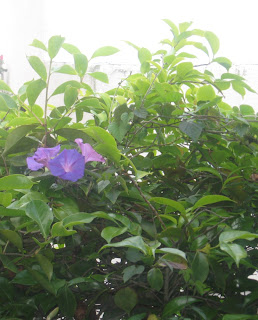 which is just the shimmery effect I want in my quilt!

On the yarn front, WendyKnits is having a summer mystery knit-along for a small shawl. I always love a mystery and I've never really knit lace before, so I decided to join in. I had a rocky time with the first dozen rows and ended up starting over. Now I'm using stitch markers (I was too cool to use them the first time) and things are going much better. 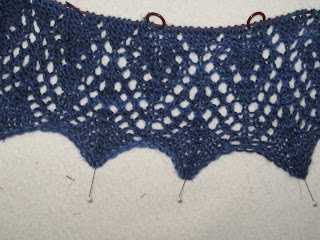 The pattern starts at the wide end of the triangle and gets smaller as you go along, which is a very nice way to work. I've kept up so far, but there's quite a bit to do before the final instruction sheet is posted next Thursday. It's not too late to jump in... and there's a group on Ravelry with lots of chatter and photos.

Thanks to everyone for the feedback and advice on the subject of irons. Nearly everyone said they had to replace them often and disliked many of them.

Special thanks to Wanda, who explained the mystery of the pleats to me!

I know that quilters use their irons more than the average person, and we tend to leave them on longer, too. But really -- this planned obsolescence thing is jut going too far! We should have to expect to buy a new iron every year...

I returned the B&D Classic yesterday but there was nothing else interesting at Target or at Orchard Supply nearby. Since some friends are coming over for a sewing day today, I ran out to the local Ace Hardware this morning to see what I could find. I ended up with another B&D: 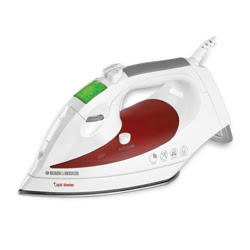 It's a "Digital Advantage" with a little extra wattage. I think this is similar to the one I had before, which lasted a couple of years. I plugged it in and gave it a whirl...

For quilting, I think it will be good. It heats up fast, irons smoothly, and puts out a lot of steam. But. There is no way to control the steam other than by turning down the temperature. The higher the temp, the more steam you get. My older version didn't work that way, and why would they think that was a good thing to change? I guess I could always just pour out the water if I want to iron dry, right?

And, try as I might, I couldn't get the sprayer to work at all. (it said to pump it a few times the first time you used it, but still nothing). Sigh. Back to the spray bottle.

I know that I'm not the only quilter who practices serial monogamy with respect to irons... it's just so hard to find one that isn't a drip, doesn't crack under pressure, won't break the bank, and has a little sex appeal, too!

Well, I'm about to stop messing around with losers and just go back to a very old, stodgy friend.

The last iron I sort of liked was a mid-priced Black & Decker that lasted about 2 or 3 years -- long term! -- and then something went wrong and it started spewing rusty water on my fabric.

Before that was a somewhat pricier Rowenta that cracked after a few years and just stopped working.

When the B&D failed, I bought a cheap Proctor Silex at CVS with a 25% off coupon... it's a steam iron, but it doesn't seem to put out any steam on its own -- only when you press the button. And the "cotton" setting feels more like "rayon" to me. A piece of junk, but of course I tossed the box and the receipt before I figured it out. Can you say "freecycle"? 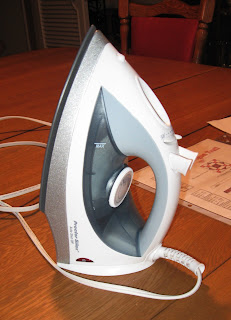 Then last weekend I was trolling in Target and picked up this Black & Decker "Classic". How could I resist the retro look and the hefty weight of it? 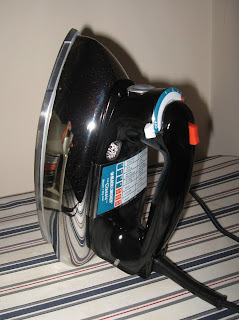 It definitely steams, and it gets REALLY hot. But this is what else it does: 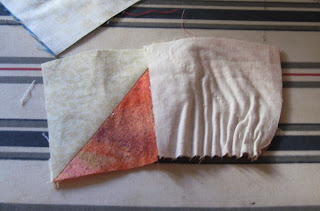 And what I'm left with now is this trusty 20+ year old guy from up in the cupboard. I put him away when I started quilting 10 years ago and decided I needed an upgrade. He still gets hot and puts out steam and doesn't pleat my fabric! 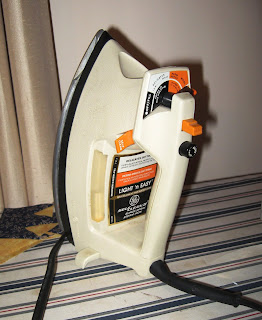 But, there's no automatic shut-off (I know some people hate that feature, but I don't) and worse is that the plug gets quite hot, so it makes me a little nervous to use it at all, let alone leave it plugged in any longer than I need to.

PLEASE could someone tell me about an iron that they love, that's lasted more than a year or two, and that I might love, too?

It's pink month at the scrappy rainbow challenge. I hardly had any pink scraps, so I ended up with just a little (16" square or so) doll quilt: 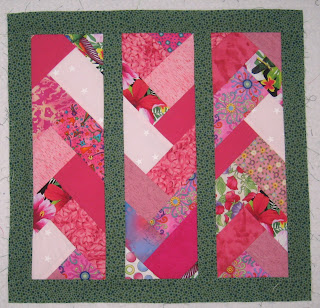 I love braided quilts -- in fact one of the very first quilts I made was a braided one. (long pause while I look for a photo, realize I don't have a photo, go take a photo and upload it...) 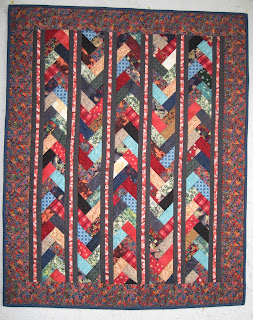 I took a class to learn how to do this; everything about this early quilt is a little wonky -- especially the quilting -- and I'm not thrilled with the pink fabric in the sashing, but I still like the overall effect.

I know there are a couple of books out on braided quilt techniques -- have you tried any of them?

One of my favorite things about quilting with a little group is how we can start out trying the same technique and come up with completely different results. Case in point: the 1600-inch strip quilts that seem to be the current rage.

We decided to do a project with 20 shared black & white fabrics and 20 "other fabrics" that would make each quilt individual. 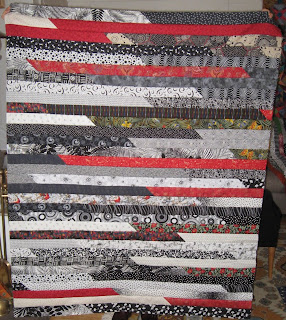 Enelda had a cold and wasn't sewing as fast, so she plans to finish at home -- love the colors! She was using a set of batik strips. 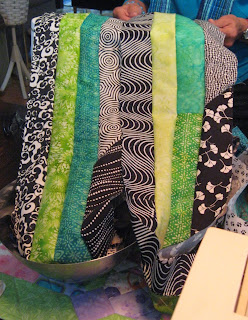 This one is mine -- my signature jewel tones. I'm not thrilled with the light colors I used; I think I should have stuck with medium/dark ones. 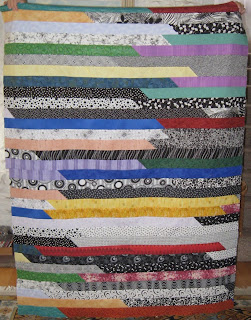 Kathy used a wide variety of strips for her top. She didn't like it but the rest of us did. 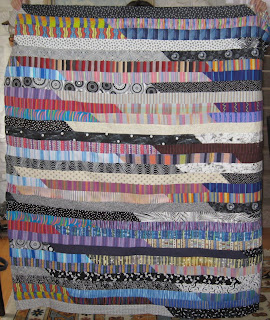 Finally, Susan's -- I think the purples and blues blend really well with the black & white. She was expecting to not like the result, but ended up pleased with it! 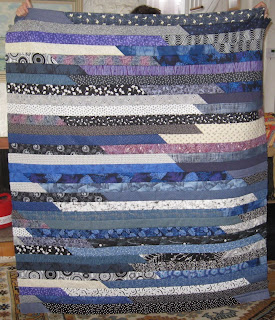 If you're going to try this, here are a couple of hints:
- if you're using batiks or other fabrics that look very similar on both sides, be careful not to flip your strips when you're doing the first step of sewing them end to end.
- take a couple of minutes to fold the 1600" strip in accordion pleats across your lap before sewing the first long seam. It will help prevent everything becoming a twisted mess.
- several of us tried putting all the black & white strips first, and then our other strips -- this helped distribute the colors more evenly, but wasn't perfect! (I mixed my lightest colors in with the black & white and then finished with all the darker colors, and this didn't work so well) 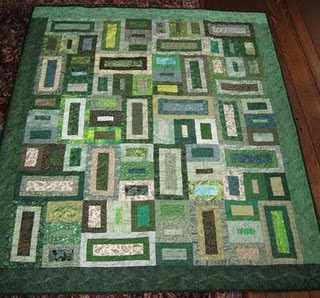 I know I just posted the finish of this quilt recently, but I like it a lot and it's my entry in the current round of Bloggers' Quilt Festival!

I like patterns that are based on blocks but allow a lot of opportunity to play with the arrangement of color. Since I've been in a monochromatic mood lately I also really liked playing with such a variety of greens -- and using up some odd bits in the process.

Be sure to visit the Festival page for links to all the other participants. 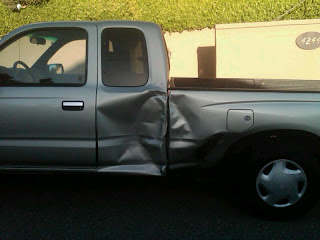 This is Al's truck after someone plowed into him on the freeway a few days ago. The cost of repairs is VERY close to the blue book value of the truck, but the insurer decided to fix it rather than calling it a total.

You can see how lucky he was that the hit came just behind the driver's seat... He came out of it a bit(!) startled but otherwise unscathed.

There's a crazy stretch of freeway here called "the maze" where two roads come together and then diverge again, with lots of folks criss-crossing -- two vehicles in the next lane collided and one lost control and veered into Al. Phew!

I posted this yesterday but noticed this morning that it had completely disappeared... strange things happening on Blogger! 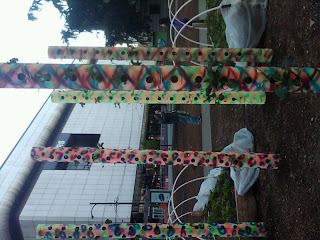 Another beautiful day! I walked by the Vancouver Art Gallery on my way to catch the SeaBus to have breakfast with my brother. Outside the gallery were these cool planting devices made from painted, perforated PVC pipe -- the pipes were filled with dirt and there were vegetable seedling planted in each hole.

(edited to add: the photo was turned the right way on my phone, but showed up sideways -- sorry!)