I haven't done well with all the stuff I planned this month, but I did finish a UFO -- 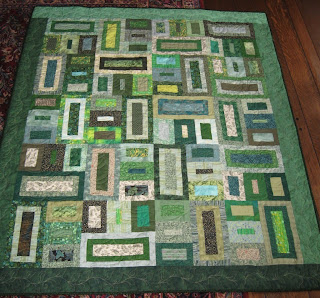 This was the one I made from Judy Laquidara's "Peaches & Dreams" pattern; I started out calling it Green Peaches, but I think it's actually Green Goddess. It was nicely quilted by Margaret with a leafy design all over, and these sweet vines in the borders: 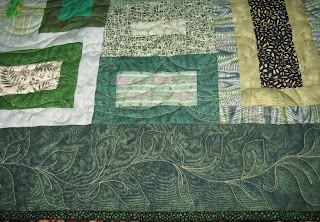 I'm quite pleased with it. And for more green, I added a couple more rows to Think Green Thoughts from last month's rainbow scrap challenge. For some reason it came out quite skewed -- possibly from sewing all the strips together in one direction, or maybe all my scraps weren't quite straight-of-grain? After it's quilted I shall have to dampen it and wrestle it into shape! 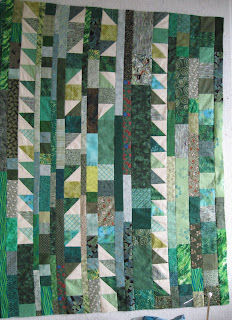 The jewelry and quilt show last weekend went pretty well -- I actually sold 4 quilts. Three were wall hangings that I had made to try out various things and was ready to part with. The fourth was -- the teal strippy top from my last post! My buyer loved it (and now I have to get it quilted up so I can deliver it)

And a cat story: Bucky has reached a new level of impending feline senility. For a while now he's been eating less than I'd like him to, and he's lost some weight. We've played around with different brands/styles/flavors of canned food, but he loses interest. We've spent a little money on blood tests and having some dental work done, but it didn't help with the eating.

What I started noticing recently, though, is that he was very nervous about eating -- constantly stopping to look around at (invisible) intruders. After moving his dish a couple of times I discovered he was most comfortable in a corner of the kitchen where there would be nothing distracting. And, he keeps eating the longest if I sit in a chair next to him while he eats! I've decided it's my twice-daily moment of zen... just sitting in the chair thinking for a few minutes. Thanks, Bucky!

I hope you can stretch out that wonkiness, because that scrap quilt is great! Really like it.

Gorgeous quilts. The colors are so soothing.

Enjoy Vancouver. It's one of my favorite cities in the world -- so Asian cosmopolitan.