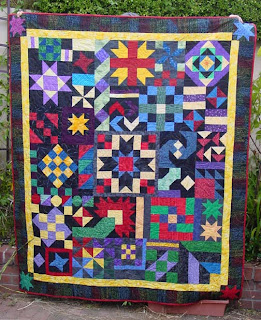 Back in my early quilting days, I made this sampler quilt from a free online BOM at the Planet Patchwork site -- designed by Diane Hundley. It was the first "big" quilt I made, and it's still one of my favorites. I made it scrappy but followed the colors of the original pattern.

Diane has created a new BOM every year since then, but this year's is the first that's grabbed me. It's a lot like my old one, with a variety of blocks and sizes put together puzzle-fashion. Here's a picture, and you can find the information here. 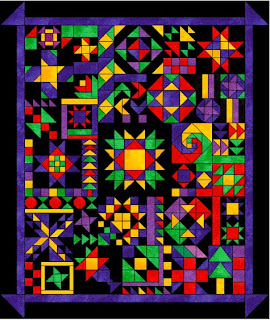 I've decided to do it in my own color-scheme this time. It's going to be mostly blue, with light blue as the background, and very scrappy. I'm hoping to pull just about all of it from my stash. Here's my first block: 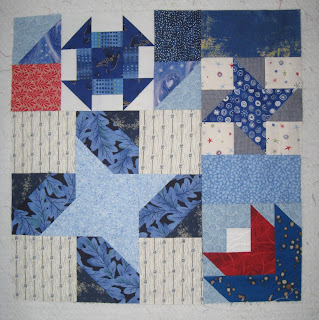 I have a nephew who is dreaming about going to the air force academy in a few years, so this will probably end up being his high-school graduation quilt.

The instructions for the second block will be posted soon -- anyone want to join me in this project?

We've had a few days of cold weather here (ha ha -- cold for us, anyway!) and I have a new pair of socks to show off, just in time. I started doing these 2-qt-a-time following the instructions from "Knitting Circles Around Socks" that Judy was exclaiming about. I still find it messy to have all those circular needles and yarn flopping around, though, so after I turned the heels I finished each sock separately. I like the stripiness of these -- it works well for completely plain knit. Next up will have to be something more colorful, though!

my 2 minutes of fame!

I've been interviewed on Violette's blog as part of her ongoing series... you can find it here!

But first, a shout-out to my friend Catherine who found out yesterday that she passed the California Bar exam! Way to go, Catherine! She did law school while working full-time, and passed on the first try. 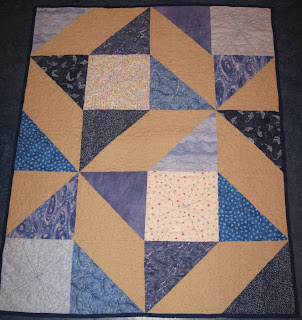 Next, a little quilt finished last night -- this is "Babycakes" made from some large-ish scraps and with lighthouses on the back. It was on my UFO challenge list this year and will be donated to the guild's baby quilt collection. I had fun quilting big pebbles in the beige areas and meandering stars in the blue triangles.

Now for all the knitting I've been doing: hats for a bunch of the Wisconsin family members! I haven't decided who gets which one yet... (and a disclaimer: they haven't been blocked yet because I'm really not sure how to block a hat)

This is a "snappy hat" made from Cascade 128 -- another little adventure with cables. 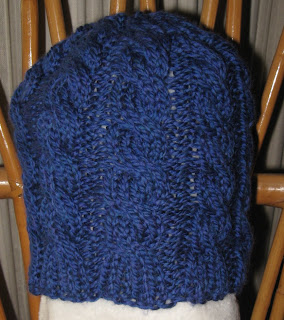 This is a spiral design in Noro Kureyon -- yummy stuff! 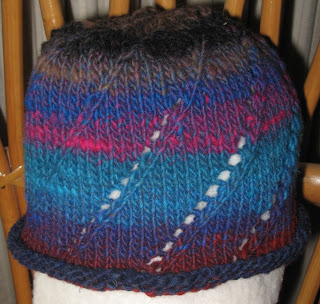 It makes a fun spiral design on top, like this: 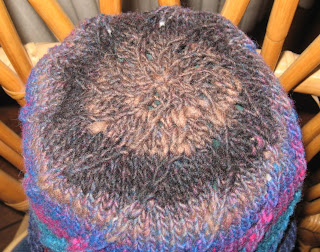 This one is "Turn a Square" made in Noro Kureyon and Cascade Pastazza: 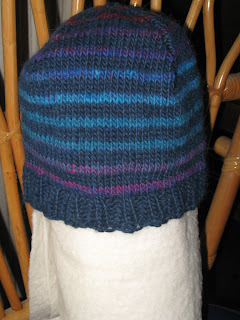 The design comes out square on top, and includes instructions for getting your stripes to almost match up instead of spiraling. 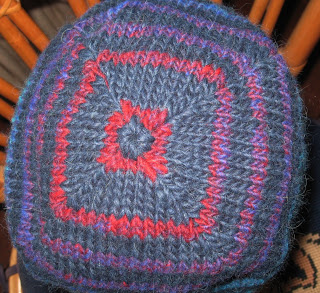 Finally, this is "Thorpe" made with Artfibers Patois: 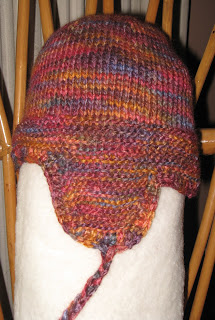 Artfibers is this amazing little shop in downtown San Francisco with the most scrumptious yarns. There are swatches of almost everything in every color so you really know what you'll get, and you can sit and try things out if you want. Very knowledgeable and friendly help, too.

All of these patterns were free on Ravelry -- let me know if you want more information. 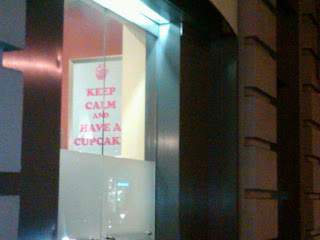 I dunno -- this sign just struck me! (It's in a new cupcake shop near where I work in San Francisco)
Posted by floribunda at Thursday, November 18, 2010 2 comments:

I have two design walls -- big sheets of insulation board covered with batting (that is usually falling off one corner as you can see in the photo...) -- and this week they're both in a monochromatic mood. 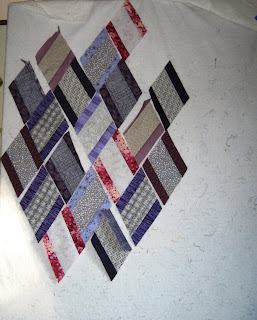 This is the beginning of "Diamond Jubilee". I pulled a ton of stuff from the purple shelf and the black & white shelf and started cutting strips -- this is one of the kits I made for myself a couple of months ago. There's lots more variety to come!

And the other wall still has green: 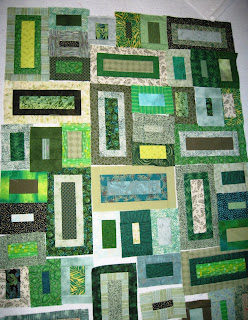 Again, I pulled a ton of fabric to start this, and it all got shoved into a big bag at some point when I had to clean the dining room for company. I probably should keep working on the greens instead of starting on purple, but... that's not me.

I seem to have lost my signature on this post. Hope it comes home for the next one!

yes I can still sew 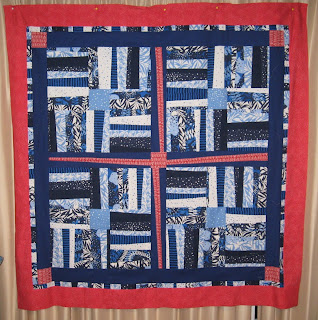 Just to prove I still have the ability to sew, here's my latest top. This is from the Whackie Girl pattern that I first saw on Nancy's site. It's made with a set of Indigo (by Timeless Treasures) FQs that I absolutely had to have as soon as they came out. I think it's the only time I've bought a whole set of one line of fabric...

It's hard to see, but the outer border is tiny white dots. I have a quilting plan for this, so it might actually get finished relatively soon!

In between all this not-sewing, I've done some traveling. First was a weekend up in Astoria, Oregon -- it's west of Portland almost to the end of the Columbia River. A very cute little downtown with a couple of "eh" quiltshops and a very nice maritime museum. It's also the home of the Happy Zombie, who gave me some great suggestions of places to eat in town.

This "fixer-upper" was across from the B&B we stayed at: 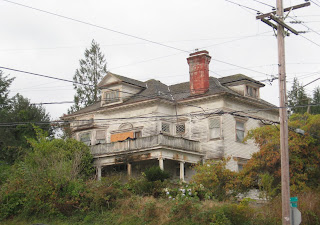 There's a long story behind it, having to do with a once-wealthy and prominent family that became notoriously dysfunctional over time. I'm paraphrasing... you can read about them here.

It was Oregon-gray when we were there. The waterfront used to be lined with fish-processing plants, but they're pretty much gone. The gulls are still hanging out, though, and I liked the lines here 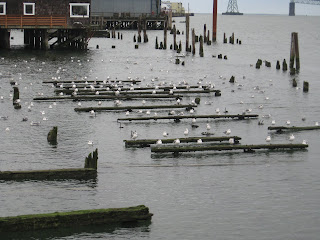 In the back of all this is a long and very high bridge connecting Oregon and Washington. Have I mentioned that I have a well-developed bridge phobia? I got nervous just looking at this one -- there is a big curving ramp to get up to the start of it and I think it was something out of a nightmare! (of course I live in the Bay Area, which has 8 or 9 bridges within a short distance of my house. Some of them don't bother me, and others I avoid...) 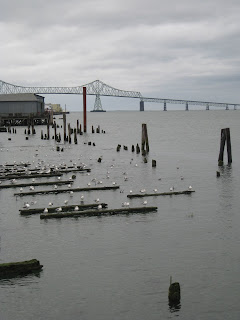 Notice the color of the sky in this next photo? That's because we're not in Oregon any more! We spent a few days in Madison, Wisconsin to visit in-laws and the weather was absolutely beautiful -- every time I go there in the fall I want to move there.

Then someone reminds me about the -25 degree winter mornings and the inches of ice that you have to blast off your windshield... Anyway, this was an interesting church in Mt. Horeb, about 20 miles or so to the west of Madison. We found a little yarn shop where one of the owners produces yarn from her own sheep, and excellent tomato soup at the Sommer Garden Cafe.

No pictures from Mad-City itself, but here's the family out for a walk at Indian Lake on Saturday afternoon -- from front to back it's DH Al, his brother Glenn, sister Kathi, his dad, BIL Daniel and SIL Maria Rosa. 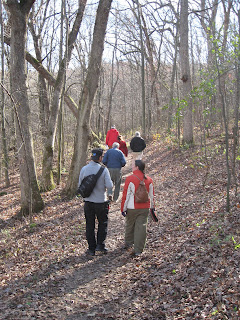 This little cutie is Kathi and Daniel's son Gabriel -- who was running circles around everyone and trying to avoid my camera. He's about 3-1/2 now and wicked smart! 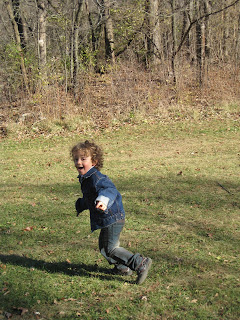 A little taste of fall for you... 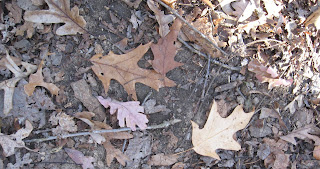 And perhaps the best part of the trip was this sign in the Milwaukee airport, just past the security checkpoint:

There's been quite a bit written about this, as I found when I googled to see if it was really a word (apparently it is!) -- it's even made it into the Huffington Post.

I'll be back soon with more knitting, and maybe a couple of couple of UFOs will get put to bed...

Before I get to the knitting... GO GIANTS! (sorry, Nancy. and anyone in Texas)

Okay, so I finished up a pair of socks yesterday. These are Fishbone Gansey socks -- they're a bit higher than what I've made before and it's impossible to see the design in this photo. 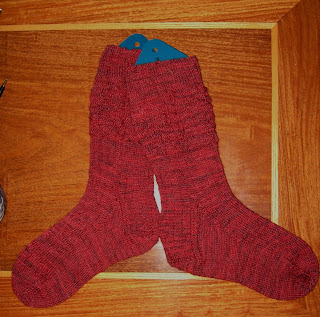 This is the actual color of the yarn -- I borrowed this photo from Judy because it didn't seem like something she'd feel too attached to! It's Kypria yarn from Sanguine Gryphon, and the color is "noise and laughter". It's fabulous to knit with -- wool, bamboo and a little nylon, I think, with a tight twist and just a hint of sheen. 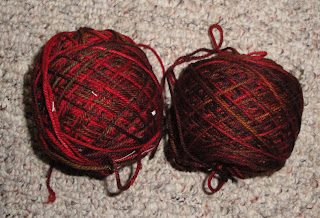 This is what the pattern on the leg looks like. The rest of the sock is a 3/1 ribbing. 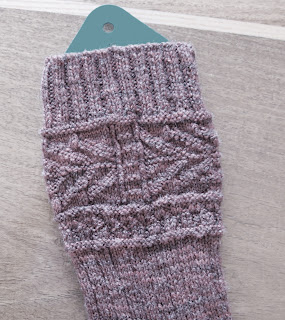 And, since Judy has been raving about knitting two socks at once I decided to try it again. I got "Knitting Circles Around Socks" on an inter-library loan and cast on immediately: 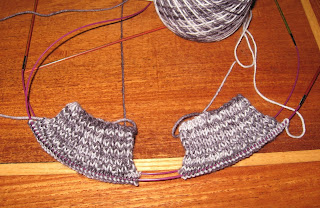 I did try a technique like this before, but I'm having a little less trouble this time. I still have to stop periodically and unwind everything, but maybe it will get better?

In between, I'm working on some hats and mittens which I'll show later on.