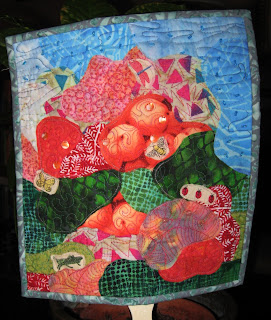 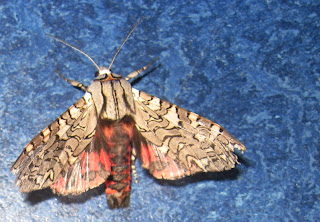 Yay -- another finish of an old UFO! This was a row robin from a few years back. I had everyone make me pale neutral blocks. 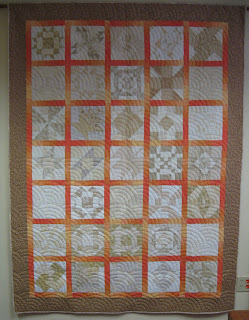 It was beautifully quilted with Baptist Fans by Darcie Grager, and I finally got the binding stitched down a couple of nights ago. It's now hanging in my office because... 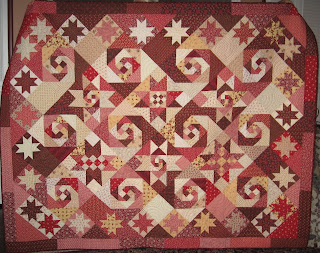 This quilt (which was there) had to come down to go to PIQF! It got juried in, and I'm so excited!

Be sure to let me know if you'll be at PIQF -- I'll be there on Friday for sure, and maybe Saturday... it's only a month away!

It was another quilt day here and I played with green fabric -- pulled out a bunch of smallish pieces from the stash and strips from the scrap bin. This is based on Judy Laquidara's "Peaches & Dreams" pattern -- free on her website. All the individual blocks are still separate, and I'm sure there will be some re-arranging going on before this gets assembled. Maybe a few more blocks, too... 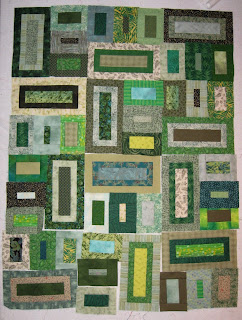 And, of course, there had to be a snack! I found a wonderful library book called "Rustic Fruit Desserts" by Cory Schreiber and Julie Richardson, and it will definitely be the next book I buy! It's full of cobblers, crisps, slumps and grunts, all made with seasonal fruits and all looking scrumptious. This is their Gingered Peach and Blackberry Pandowdy. Wonderful buttery crust on top and juicy fruit tucked below. Yum! (Thanks again, Catherine, for the ice cream!) 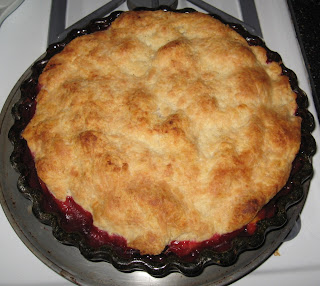 I have a big UFO finish to show off as soon as I hang it up and get a picture... and a little other good news. Stay tuned!

There was an thought-provoking, educational, and entertaining article in the local paper last Sunday, headlined "Consumer Reports for Voters" -- it talked about economics and family values in "red states" and "blue states". Here's a link.

and here's a link to the underlying references. I really think this needs to be circulated!

Labors of the Day

First things first: food! Whenever my mini-groups get together, there has to be "snack" and it better be good! Today was an informal meet-up at my house so I did a little baking. It started with a bunch of apples that had been sitting in the fridge for a while and somehow we kept ignoring them. I went to Smitten Kitchen to see what she had to say about apples, and was drawn in by "Mom's Apple Cake": 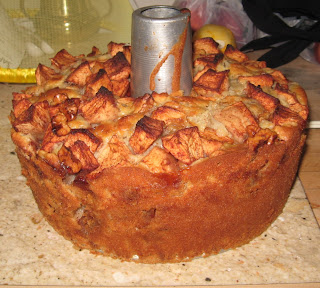 It has a ton of big chunks of apple with cinnamon-sugar and walnuts, and a little cake batter to hold it together. Yum! It almost tastes like bread & butter pudding, except that it's apple chunks instead of bread cubes. (and you can substitute applesauce for half the oil with no ill effects!)

I've had several projects on the verge of being finished, and two were done today. This is from a row robin in an online group last year, but was originally based on a batik & black swap a few years back -- very cheery... 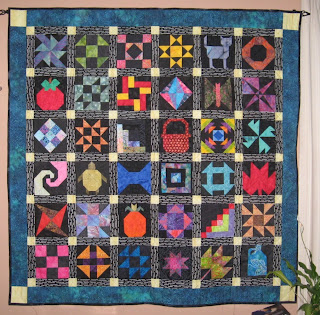 And this was a little sampler I made while doing the "Press for Success" class online with Quilt University -- also a couple of years ago. I love the way it coordinates with the rug in our entry! 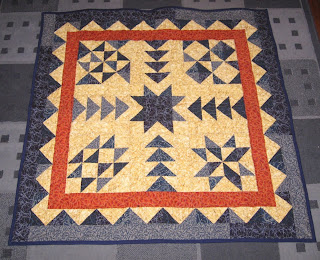 I have a big quilt that needs the binding sewn on, but it needs to wait until the weather cools down a bit here. True to form, summer seems to start in September!