But first: have you been bitten by the pillowcase bug? There are a few projects circulating the craft world to make pillowcases for kids in hospitals, and kids overseas... Craft Hope is promoting one such project for ConKerr Cancer and you can follow the link to read about it.

I wanted to make a couple of cases for my own bed, and since Joann's had everything on sale and some insanely cute fabrics to boot, I decided to jump in and sew. I bought fabrics to the body of the cases, and pulled the trim pieces from stash.

You can see a demo of my absolute favorite pattern here. It is genius!

You start with 27" of fabric for the body, 3" for the accent strip, and 9" for the border. It all gets rolled together and pinned up in a tube like this:

And after you sew one seam and turn it right-sides out, you end up with beautiful finished borders and no raw edges! 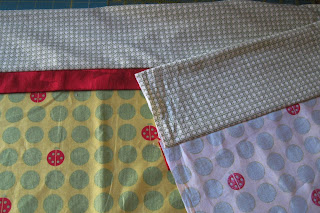 Then you just have to stitch up the side and bottom (I do a quick French seam but a serger would be even faster) and voila: 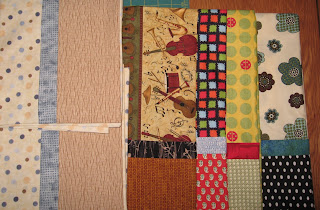 So -- the kit bag -- I got energetic over the weekend and pulled out several patterns I've been thinking about and a ton of fabric and created "kits" for myself for when I feel like sewing but not cutting. Most of these are very scrappy and I'm looking forward to working on them. 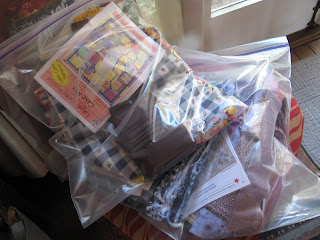 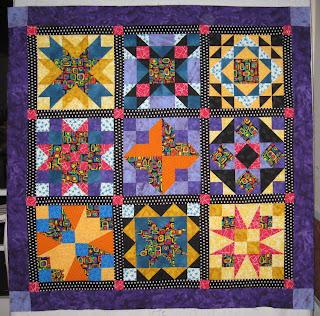 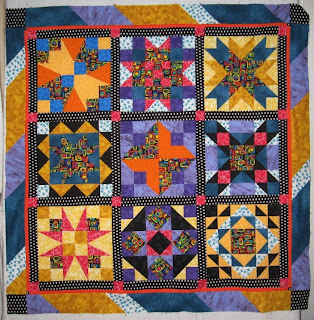 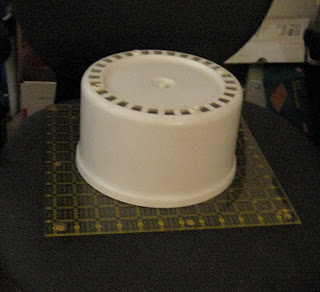 I feel like I've been away for ages -- and in fact it's been two weeks! I haven't actually been anywhere, though... just working, pulling weeds, wondering if we're ever going to get real summer weather here in the foggy Bay Area.

I have been plugging away on some UFOs, too. This is my August challenge project -- yet another set of blocks. This was a round robin from last year that started from a black & batik block swap a couple of years before that. I only actually made one of these blocks -- the orange ring in the upper right corner. 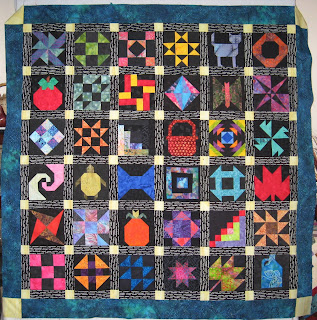 I seem to have a thing for black & white sashing -- in fact there's another quilt top coming up soon that I sashed today with black & white dots. It's about 52" square, and I need to think of a simple quilting scheme for this one, since it's already pretty busy...

Have you heard about knit-bombs or guerrilla knitting? It's an international phenomenon that involves yarn-o-philes creating knitted covers for public property such as trees, light poles, statues, etc. It showed up near me on the Berkeley/Oakland border recently with a knitted cover for the letter "T" in a big metal "There" sculpture which created a bit of a controversy. ( You can google "guerrilla knitting" and get to the flickr gallery as well as thousands of articles)

I hadn't seen any of this up close, though, until we went for dinner in the Elmwood district last week, and noticed that a number of signposts had been "bombed" -- they are so cool!

Here's Al posing with one of them:

and a close-up of some of the funky details: 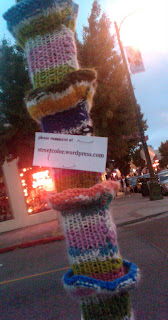 I came home and immediately started knitting a cover for the stop-sign pole at my corner. I suspect the witchy woman next door will tear it down, but we'll see.

Spotted in the camellia bush outside my window this afternoon -- a reminder to stop and smell the flowers: 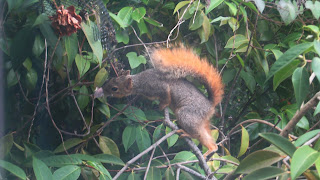 Annoyed by the paparazzi -- now if I could just get him to leave my apples alone! 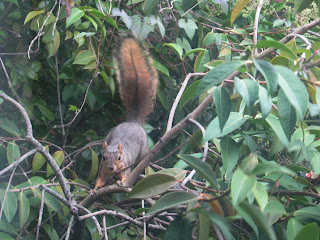