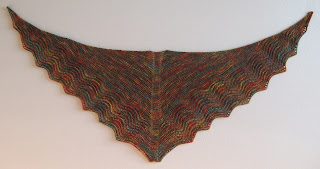 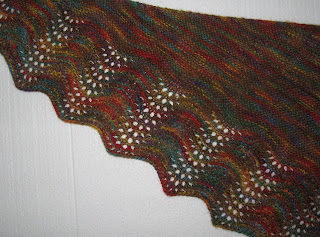 Whatever happens next, I'll bet Al has no regrets about his decision to rejoin the race ... and if you end up spending time alone in Hawaii, look at it this way: you'll be able to go wherever and do whatever you choose with no negotiation.

I love the shawl and am going to hop onto ravelry to track down the pattern. You did a great job. You might like to try the Brandywine shawl next--it's similar with a little more complex lace pattern.

That's a pretty popular pattern and you did a great job with it! Yay, shawls!

Yikes...what a rollercoaser for Al! I hope he is able to get going again and there are no more dramas. Can't have you hanging around Kauai all by your lonesome, can we!

Beautiful shawl. I've been wanting to try that pattern, and yours is giving me a nudge in that direction.

Love the scarf pattern - thanks for sharing it.