At Long Beach last year, my friend Catherine and I saw this dynamic quilt called "Country Barter" made by Mickey Beebe of Santa Cruz, CA using African and other fabrics. We were intrigued by the fact that the blocks look so different even though they're all the same pattern -- Basement Window. We saw the quilt again at PIQF in October and decided to use the block as a project for our mini-group. 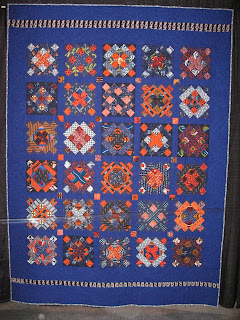 Catherine was delegated to pick out a focus fabric for all of us to use, and she chose a batik in complementary oranges and blues that looks variously like oak leaves or kelp depending on your perspective! Today four of us gathered at her house, spread our piles of fabric all over her furniture, and got to work! There's a pattern in one of Judy Hopkins' books that involved templates -- we rejected that after I realized that Bonnie Hunter's article about the Old Kentucky Album block in January's "Quiltmaker" was actually the same block and was based on simple 2" strips and squares.

So, after all that introduction, here are my first four blocks: 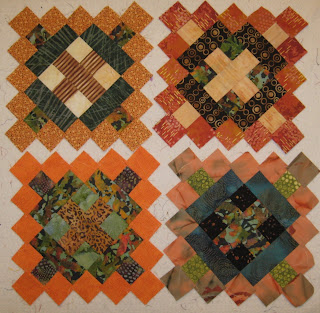 (these are meant to get trimmed down to square, but it hasn't been done yet. I'm toying with the idea of appliqueing them to a plain background so as to keep the zigzag edges...)

WV: ovest -- A garment for the torso endorsed by Oprah

This is a great idea. I love how the blue in the blocks becomes part of the background. Very nice!

What a neat block. That looks like fun to make, and makes me think I might have to look for Quiltmaker. If you trim the edges, will there be bias edges all around?

They are all a little different. I do hope you applique them and don't trim them. More work but pretty cool too.

They do look very cool with the zig zag edges.