A couple of months ago I met Sandy Klop, the designer of American Jane patterns and fabric, at a local quilt show. Someone had a version of this quilt in the show and I was blown away by the woven effect and by the fact that I could NOT figure out how it was constructed. It turns out that Sandi had the pattern for sale; it's called Pretzel Party. I had to have it, even after she told me it had lots of Y-seams. "I'm not afraid of Y-seams", I proclaimed boldly... 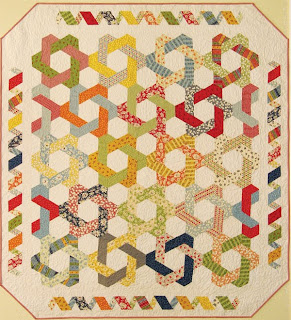 Ha ha ha. This damn quilt has 12 Y-seams in each block! Plus the ones in the half-pretzels around the sides. That's way too many Y-seams for me. Luckily I discovered this before I cut into the beautiful Bali-pop I was going to use, because I was smart enough to try a block with scraps first... very tedious stuff, and I don't do tedious over and over very well! (but I still think it would look terrific in batiks) 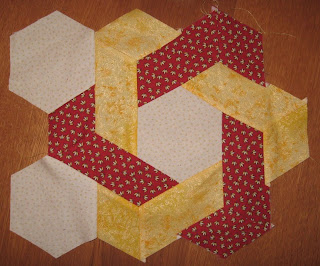 I spent a chaotic weekend in Seattle with my youngest brother and his brood. The heavy quilt seems to be a hit with the oldest daughter, as she slept more peacefully the first night with it. The middle kids are fun and crazy, but the youngest is a wild child, boundlessly energetic and fearless. This came to a head on Saturday when he was racing around the house and slid into the base of a table, dislodging one of his teeth... after an emergency trip to the dentist he will now have a bit of a gap-toothed smile until his permanent tooth grows in: 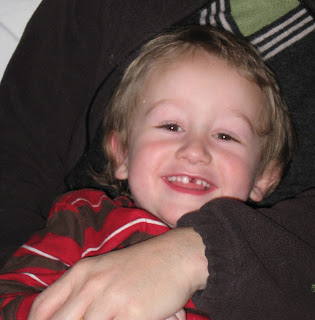 He screamed bloody murder until the tooth was pulled; after that he was back to racing around the house. (If you need the name of a fabulous pediatric dentist in Seattle, just ask -- this guy was amazing!)

And finally, just to keep one of my themes going, this was our hotel room in Seattle:

I swear, it's a different chain altogether than where we stayed in Madison (see banner above) but what is it with these pillows? Sculptural qualities aside, they are pretty much useless -- much too thick and foam-rubbery to sleep on comfortably.

I couldn't bear all those Y-seams either. And the pillow pic is great!

Is this some kind of an undiscovered hotel decorating trend? Maybe you could get in on the ground floor...

Chuck the Y-seams, my friend. You will go insane...

Beautiful pattern but those Y seams would not work for me.
I have a daughter who was like child you described. She was jumping on a coffee table, missed and put her only two teeth right through her tongue. Even that didn't stop her from jumping and talking. She's nearly 40 now and still at it. Lol.

I love the quilt pattern. Y seams don't bother me a bit, since I have the sense to hand piece them.

I never knocked my teeth out, but sure put a goose egg on the back of my head from spinning round and round in the living room, falling and hitting said head on the very sharp corner of the coffee table. I healed;coffee table had a dented corner for years. LOL

Love the quilt pattern but you're right-12 y seams in a block is way too many!

DD knocked her two front teeth jumping off a table at 2 years old. We also had a terrific pediatric dentist-one tooth had to come out right away but he hoped the other would firm up. No, it fell out naturally after a year...she had a gapped tooth smile for a very long time.:)

I'd have to have some wine close by to attempt the y-seams. Although beautiful when done, I am not sure I could finish the quilt!

Yeah, there's no way I could do all those Y seams. That sounds worse than the pineapple quilt! Gold star to you!