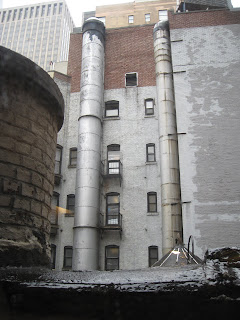 This was the lovely view from my hotel room in New York -- actually the room itself was very pretty, if petite, and had a fabulous bed and free wireless. So, I pretty much kept the shade closed whenever I was in there! (I keep seeing a quilt in this photo, though)

I think I mentioned that one of my mini-groups was exchanging little quilts with the theme of "hearts". Here is mine all done, and hanging in the home of the recipient. Whenever we exchange things, we draw numbers to see who gets first choice -- and it's always interesting to see who chooses what, since we all have somewhat different taste and styles. 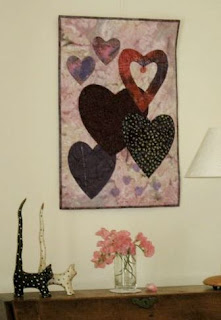 Here are the hearts I received -- a very bright and eclectic variety of fabrics! 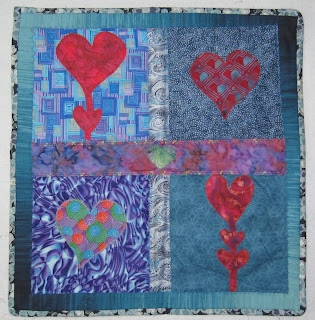 Also, a couple of weeks ago I posted a photo of the beginning of the flower stalk of this honey bush. Here it is today! I think this is about 18" long... The weather here was perfect today -- just a little bit crisp and right for a long walk. I finished up with my meetings at about 2:30 and walked down to City Quilter, which is one of my alltime favorite shops. I was tempted by so many of their fabrics but actually didn't buy any! I felt like my recent bout of online retail therapy would keep me going for a while, and I'm really trying to stop buying big prints unless/until I have some clue about what to do with them. I was particularly taken with some of Moda's Wonderland collection, Andover's Midcentury Modern, and something with beautiful blue and green ivy leaves for which I can't remember the manufacturer (edited to add: Hoffman's Reflections collection) . I did buy Karen Eckmeier's new book on machine applique' layers, which looks really intriguing. It would be fun to live near this shop because they seem to have really interesting classes -- not just the "advance beginner" stuff most of my local shops have...

On the way back uptown to my hotel I came across a totally amazing store with buttons and all sorts of trims -- M J Trimmings. It was HUGE! I walked around with my jaw hanging open but didn't buy anything. Definitely worth a visit if you're in the area.

The highlight of my touristy activities, though, was the Paula Nadelstern show at the American Folk Art Museum. There were just a handful of quilt blocks on the first floor of the museum and my first thought was -- "is this all?" But upstairs there was a fabulous array. Her use of fabric is simply amazing. They look completely different close up and from a distance, and I was happy to see that while she's relatively careful, her piecing is not as compulsively perfect as some of the other pros who work with tiny pieces (Sally Collins comes to mind, of course!) Most of the quilts are in her new Kaleidoscopes book. Again, if you're within striking distance of Manhattan I highly recommend this exhibit.

I also went up to the Museum's annex at Lincoln Square to see the exhibit of contemporary African-American quilts. Many of them had a musical theme, and some were quite wonderful! (no photos allowed at either of the museums...)

Tomorrow, it's an early flight home and maybe a little quality time with three weeks' worth of Friday Block Party blocks! 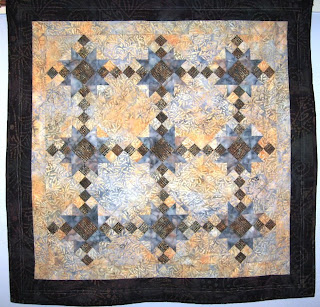 I'm sure you've heard about the virtual quilt festival that Park City Girl organized. It's really REALLY hard to pick one favorite, but this one is consistently in my top ten -- I love the way the colors blend and glow in this wall hanging.

Be sure to scroll on over and check out the rest of the "show"!

This is probably the last time you'll have to look at this one -- the Amish houses are done! They were nicely quilted by Joanne as part of her quilter's stimulus package and I finished up with a black & white dotted binding. 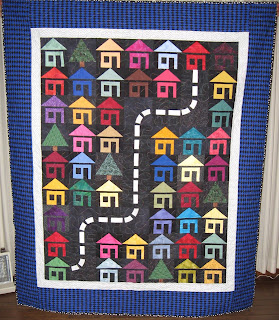 Here's a picture of the cool backing fabric that my friend Catherine gave me -- I supplemented it with some odds & ends... 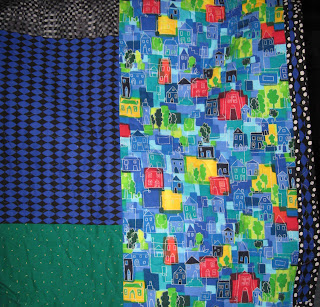 And I've been doing a little retail therapy! I'm pretty good about resisting most of the fabric store emails I get, but I was tempted by the recent Z&S sale -- it was 15% off their already reasonable prices. Isn't this a sweet presentation? 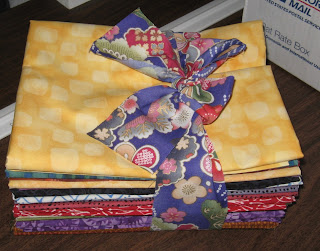 I succumbed to a handful of batiks (on the left) and a bunch of really nice textural prints. You'll notice that I bought two colors of a couple of the prints -- I end up doing that fairly often. The sale is still be on for a few more days, so venture over at your own peril! 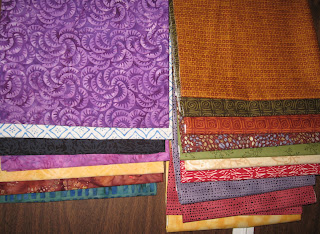 Sunday I'm flying off for some more work stuff, to Orlando and then New York. I think I'll have an afternoon free, and I was excited to find that there will be two quilt exhibits at the American Folk Art Museum -- one is Paula Nadelstern's kaleidoscopes and the other is contemporary African American quilts. It's always fun to be able to sneak in some textile goodness in between the business meetings! 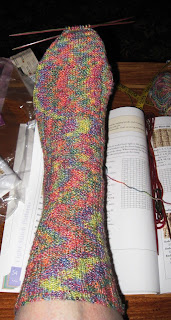 But first some yarn -- I finished the first of a new pair this evening -- except for grafting the toe, which I'll do during daylight tomorrow. I loved the tutti-frutti effect of this Regia yarn in the ball, but I'm not sure about the wierd zigzag effect when it's knitted up! I used a smaller needle than I have in the past and it really makes a difference; this is the first sock that doesn't seem stretched out to me.

And -- I finished the quilt top that I made for the collection that Debra is sending to her local women's shelter. It needs a good pressing and then it will go in the mail on Monday. 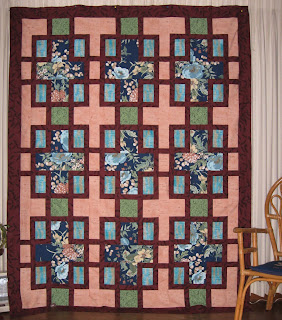 Tomorrow I hope to have time to play with some fabric paints, and to make some more ATCs for the next group of birthdays in the swap.

is it spring yet? 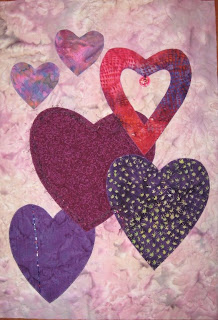 I had a lot of fun doing embellished circles for a birthday block a couple of months ago, so when one of my mini-groups decided we should make small quilts with hearts to swap, I decided to try the process again. Here it is, almost done. I want to play with some more stuff but I'm not quite sure what -- maybe some paint-sticks or foil. Right now there is some couched yarn and a variety of beads.

I'm almost done with the quilt top I started here for Debra's charity project -- and I'm determined to get it to the post office on Monday.

The handiquilter is behaving a little bit better now. Vicki kindly recommended her miracle thread -- So Fine from Superior -- and it does seem to be doing the trick! I've been messing around on a sort of small, trashy top and it's not skipping stitches anymore (hurrah!) and only broke a couple of times.

And after a few days of rain it's back to looking like spring here again, so I snapped a few photos in the garden this afternoon: 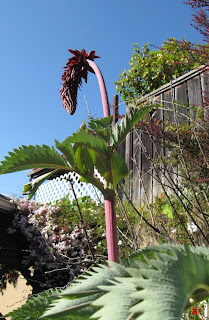 Isn't this an amazing thing? It's the flower stalk from a honeybush (Melianthus) and after about three years it's blooming for the first time. Below is a better picture of the leaves, nicely complementing Bucky. The leaves are actually fairly soft, despite their spiky appearance. I'll post another photo when the flowers open! 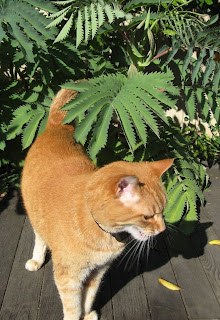 And I know I've shown a picture of this Boronia vine before, but I love it so much when it takes off blooming in the spring that I have to keep taking photos... 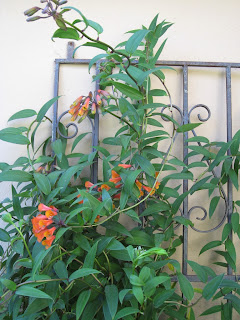 Best of all, the blueberry bushes have lots of flowers -- which means lots of blueberries in a couple of months!

I had sort of sworn off politics (on the blog, anyway) but this clip is just too funny to pass up.
http://www.deusexmalcontent.com/2009/04/satanic-reverses.html

I rarely watch Rachel Maddow's show but I guess I need to tune in more often!

I'm going to show pictures of the last two Friday Block Party blocks since I don't have much else... this one is called "The Queen's X" 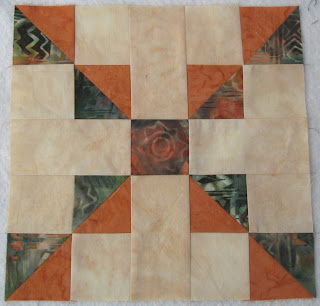 And this is "Cathy's Star". They're both from Quilters' Cache. I had a fair amount of trouble keeping the colors straight on this second one... 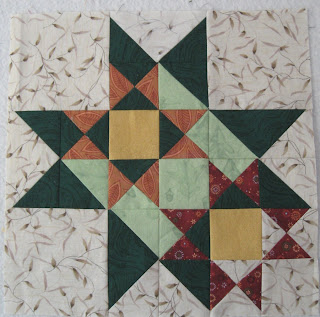 I went out and bought one spool each of a bunch of different threads this morning to see if I could find something that wouldn't skip and/or break on the Handiquilter. And then I came home and decided to be smart for a change -- so I took my niece's quilt off the frame and dug out something I don't care much about to practice on. I'm going to try to be systematic about it, although that's not my style at all! My first step will be to round up all the packets of machine needles that are scattered around and get them organized, and try to figure out what the various "loose" ones are -- although I practically need a microscope to read the information that's stamped on them.

Some of you may recall that I had a Handiquilter frame set up; I took it down nearly a year ago when my sister came to visit because it lives in the guestroom and takes up pretty much all the space. And re-assembling it has been on my to-do list for months now. So I finally put it all back together, got the MaxThroat hooked up and (hurrah!) it actually worked.

Until I actually started to quilt with it...

I am SO frustrated trying to get more than a few inches done without the thread skipping and breaking! Sometimes it will skip a whole inch or more.

I have:
I am not sewing fast at all. What next? I wish I lived in a taller building because then it would be more satisfying to pitch the thing out the window!
(of course I rarely have any of these problems when stitching off the frame with my Brother PQ1500, and for once, the MaxThroat is actually working really well!)

Thanks for any words of encouragement. My free-motion quilting is amateurish at best but I really do want to get better at it, and I have a stack of flimsies waiting to be learning experiences...