And more specifically, how many of you named Julie are "Julie Anne"? I think almost every Julie I've ever known had Anne as a middle name.

I'll add links to bloggers named Julie, and I'll even go so far as to include variations like Julia, if you leave me a comment! Secret confession: I always wanted my name to be Julia, but it's "just" Julie.

The title of this post refers to the miserable cold I have had since Thursday evening. One of my co-workers had been coughing and sneezing up a storm when I was in the office on Tuesday and I must have picked up a toxic piece of paper from her... small consolation that nearly everyone else in blogland has already had this. I'm expecting to be better for New Year's Eve, since we're having 20+ people over -- I promise to make Al do all the food prep; I'll just sit in a corner with a bottle of bubbly all evening!

Being sick didn't stop me from playing with fabric over the weekend. First, I stitched up the small size of the Mosaic Tile mystery from the "A Pocket Full of Mysteries" yahoo list. (sorry, it's gone... Dorothy only leaves the patterns up for free for a few days). For some reason I can't get this to photograph with the actual color of the ferns -- they're blue-green, not gray. 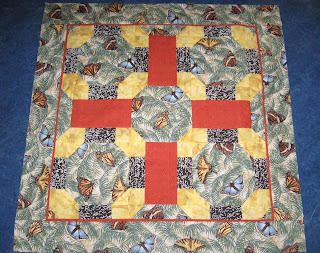 Here's a close-up of the fabrics. I like the way the black and white dots mimic the similar detail in the butterfly wings. 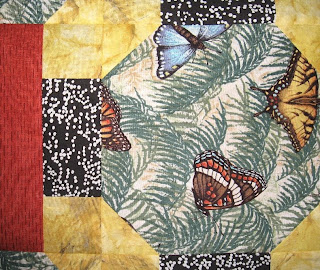 And -- ta-da: serious progress on the pink house. 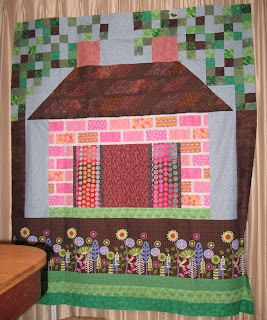 I've since added a blue strip at the top, and all it needs is some decoration on the door ( to make it look more like a double door) and a strip of blue on each side. As I mentioned before, this pattern is riddled with mistakes and was a PITA to make. Anyone want the pattern? 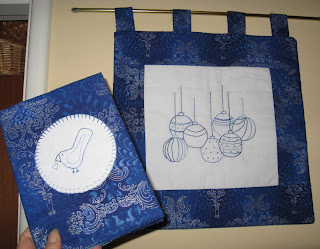 Here's what I received from Beth in Australia -- an adorable little wall-hanging with embroidered and beaded ornaments, and a covered notebook to match -- along with a bag of authentic Aussie licorice (my favorite!) . Here's a close-up of the ornaments: 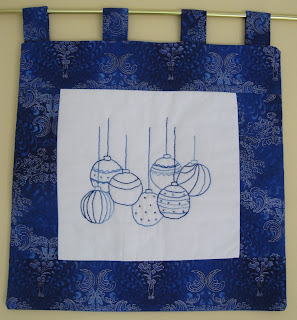 And I played Santa for Oddbjorg in Norway. I could see from her blog that she'd been doing some knitting, so I made a knitting needle case for her, and a little square bag from a cool pattern I found at PIQF. 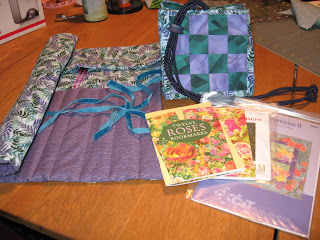 Al and I spent all morning helping to cook and serve a fabulous meal (and wash a lot of pans!) at a local women's shelter; one of my neighbors has gotten involved with them the last couple of years and it was a lot of fun to join in. I had never done this kind of thing before but it's definitely more satisfying -- and tiring -- than just writing a check.

I came home and put a small turkey in the oven and it smells soooo good but it's not done yet. We "missed" Thanksgiving while we were Down Under on vacation, so this is meant to make up for it. No pumpkin pie, though -- what a shame! 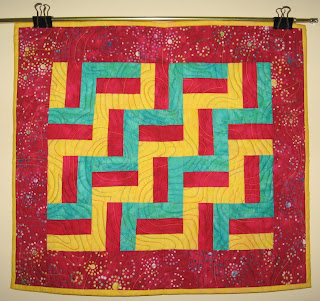 I keep forgetting to post about the quilt above -- it came from Melinda for the ALQS II swap. I love the bright batiks and the cool quilting!

And today the mailman brought my Spring Fling Round Robin II quilt -- this was made by Liliane in Luxembourg, Luisa in Portugal, and Tami and Susan in the US. I said that red was a favorite color and that I liked bright rather than drab... and definitely got what was coming to me! 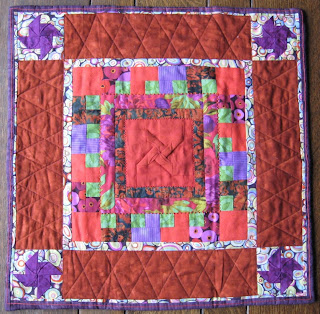 The center block is 3-dimensional, and one of the gals added some beading as an accent: 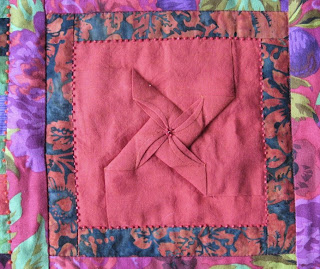 Here's a close-up of one of Tami's origami pinwheels in the corner, and more beads: 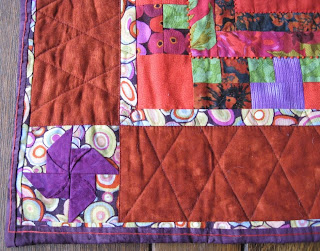 Did I mention that the hats all got knitted and/or crocheted and mailed off to Seattle? Although they haven't arrived yet despite priority mailing last Friday. I guess it will just stretch out the holiday for the kids! Al did slog through crocheting one hat; unfortunately he insisted on using some yarn that was very tangly ("Homespun" from Michaels) and the hat was a tiny bit wonky... but my niece won't notice.

Hope everyone stays warm and has happy holidays and a long weekend!

A couple of people -- Vicki and Kate have been posting about some long-term cross stitch projects they're trying to finish, so I decided it was time to do the same. This one is pretty old -- 1985 or maybe it was more like 1976 -- it's some adorable Kate Greenaway girls. I ran out of at least one of the colors, or maybe I've just misplaced some of the thread? I keep thinking I'll finally finish it for my youngest niece who is turning 6 at the end of January. Or not. 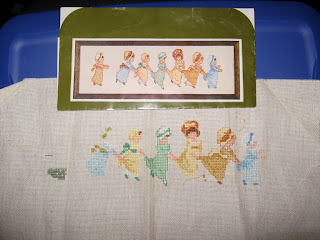 And this is a project my mother started about 40 years ago. She did a ton of stitchy stuff -- started with knitting, picked up crewel embroidery, cross stitch, needlepoint, crochet, and finally quilting before she died 20 years ago. Garment sewing was the one thing she never got the hang of -- I remember one dress she made where one dart pointed up and the other pointed down! I ended up being the dressmaker in the family and I wish I'd saved a couple of the hideous polyester pantsuits she had me make for her...

Anyway, this counted cross stitch was supposed to end up being a purse. She did about half of what's here, and then decided she just couldn't see the stitches anymore (over 40, ya know?) and I took it over. The canvas is really tiny! 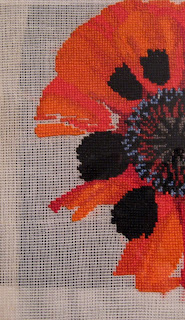 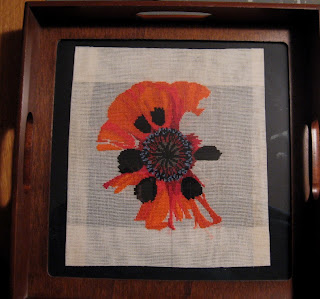 After a while I gave up, too. The black was especially hard to work with, and the whole background was meant to be black! It sat in my cupboard for about 30 years, and then one day I saw a blog post or an article about displaying unfinished projects. I had this wooden tray in the closet, too, which my mother had planned to use for something (She was the original family stasher) and -- voila -- I now have the Poppy Fragment on display in my dining room. So far, no one has volunteered to finish it for me!

I decided about three days ago that I needed to make knit/crochet hats for my youngest brother and 3 kids to go along with the 2 scarves I had already made for SIL and youngest daughter. So, I'm knee-deep in two of them... Al decided he should help and asked me to teach him how to crochet last night. Very amusing, since I crochet left-handed and he's right-handed. I finally dug out a book with pictures! I just could not figure out how to hold everything backwards when trying to crochet into the chain. I think he's master single-crochet now, and the pattern calls for double -- so we'll have another session tonight. Think kind and patient thoughts for me, please! 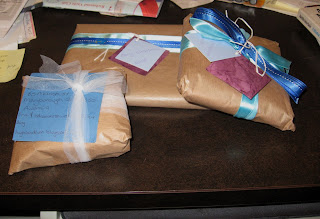 I think blogger used to load photos in the order that you chose them, but now it's doing it in reverse and I never seem to remember... so my posts are also being written in reverse because I'm too lazy to drag the pictures around. I keep hearing that there are other/better ways to load pictures, but I'm a creature of habit!

So, the first photo is my sweet little pile of goodies from the Secret Santa Christmas Swap -- they came from Beth in Australia, and I'm going to try very hard NOT TO OPEN THEM until Christmas.

The mailbox has been very very good to me lately. I think I forgot to post that I was one of the winners of the Block Lotto in November -- yeah! I absolutely love these little Amish House blocks, and I won 50 of them! Here are most of the ones that have come so far. I have a couple of ideas about how to set them together, which I'll share shortly. (I've never tried posting designs from EQ6 but it's probably time I learned how to do it...) 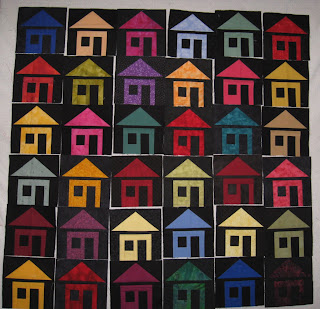 And -- relating to the title of this post -- I decided to try the latest craze, so here is my first wrapped plate: 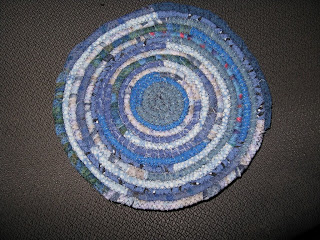 I need to pay a little more attention to which fabric goes where, because the "color blocks" really do show up! And I think I need to find a better quality of cord, because I kept running into this problem: 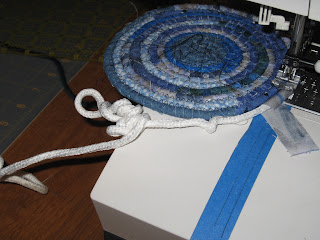 I think my cord is all polyester, and it definitely liked to bunch up when I wasn't looking. Do the rest of you wrappers have this problem? DH watched me start this one, was very intrigued by the photo on the cover of the book, and was somewhat disappointed that I didn't immediately create something similar! I think I'll hand him one of my scrap bins and a bottle of glue and let him have a try at it.

where would you go?

Every year for the last few years I've done a work trip to Europe in February -- great timing weather-wise, right? In the past it's involved moving quickly from London to Paris to Munich to Zurich in some combination of meetings.

For 2009, it has been decided that all of our meetings will be held in Barcelona, which is one of my favorite cities. But, I'm thinking it's just not worth going all the way there for only about 3 days of work... so if you were me, where would you go to add on a few days of fun?

In quilty news, I've finished a tablerunner for a swap, and I'll post a photo as soon as it gets where it's going in Las Vegas. I also sent out my SSGS package and my finished Spring Fling Round Robin II quilt. Can't post photos of those, either, so you just have to trust me!

First off, I've finished up the quilt for the Spring Fling Round Robin II, and will go out in the mail tomorrow or Friday. I can't show a picture of the whole thing until it gets where it's going. And of course I can't wait to see what shows up in my mailbox! 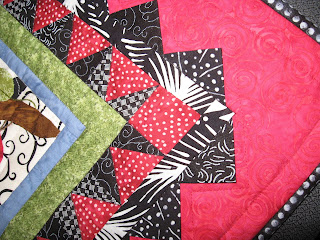 I decided to show off the shopping I did when I was Down Under; I have plans for a fairly simple quilt from all of these. Here's the first set of "Kiwiana" fabrics -- these are mostly FQs, with a meter of the panel pring. 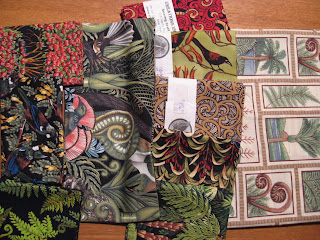 This is more Kiwiana, in fat 8ths -- I just love the prints! 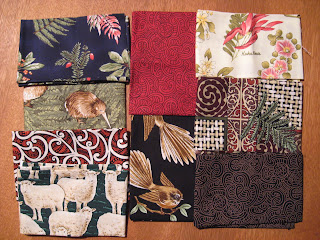 Finally, a few from Australia. My sister had brought me a great set of FQs a couple of years ago when she visited, and I decided I needed to round them out with something neutral... and then the blue ones just came along for the ride! 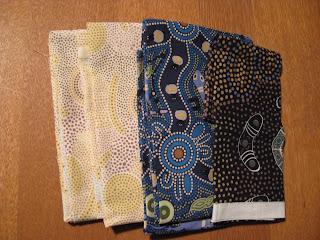 And -- another finish. This is a cluster-stitch crochet scarf for my "nice" SIL. It's made from Crystal Palace "Waikiki" in the "Tide Pool" color. I think it's a combination of linen and rayon, and it has a nice drape. 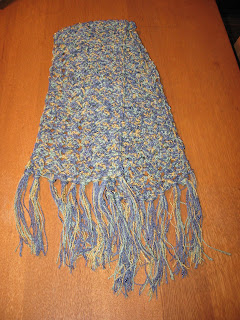