Finding the space and getting the lease worked out was easy and almost fun. But everything since has been a pain. Mostly the whole phone thing. When ATT came to hook up the lines -- hey, there WERE no lines, and we had to get a wiring contractor in ($$) and then ATT had to come back ($). Then we find out that the ATT salesman had a totally screwy idea of what we wanted, so I spent at least 4 hours on the phone with them today trying to straighten out our voicemail. Each person I talked to was very nice, but either neglected to push the last button to make whatever they were doing work right, or gave me wrong information so I had to call back and talk to a different person.

All I wanted was two phone lines for two different people, with a voicemail box on each phone. Somehow we ended up with two lines that are hooked into each other in a way I don't understand, although I think the mailboxes are now separate. I don't know what's going to happen when we actually plug two separate phones in -- we have a 2-line phone that doesn't work the way we expected, so I fear we're going to end up back at square one. The DSL situation is another story, but I'll spare you! 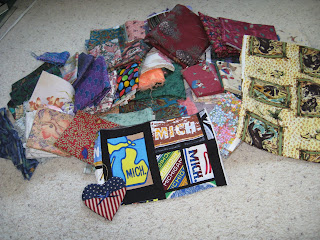 In better news... my box o' scraps from Jeanne arrived today to cheer me up! This was the result of a swap that Nancy, NP organized recently, reasoning that it might be more fun to play with new scraps than the ones you've been sifting through for years. Jeanne included a cute little patriotic heart ornament and a swatch from her home state. My favorite was this big piece of funny chimpanzee fabric -- hardly a "scrap"! 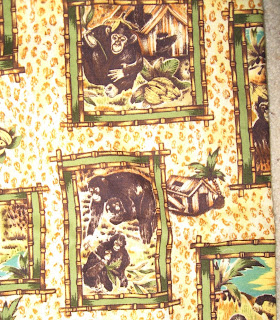 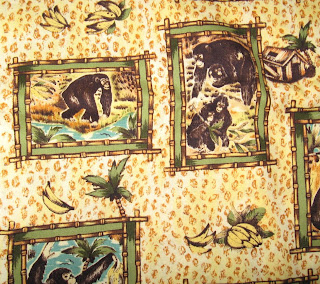 I did go to the Quilt Festival in Long Beach last weekend and had a great time other than sitting down on a seat on the local train that was (unbeknownst to me) soaking wet with beer. So, I had to walk back to my hotel room soaked through to my undies! Yech -- immediate shower. I have lots of photos that I need to edit into Flickr, but it might take me a few days to get that done. Here's a picture of one of my favorites, though, as a start -- it is "Rendez-Vous" by Inge Mardal and Steen Hougs. 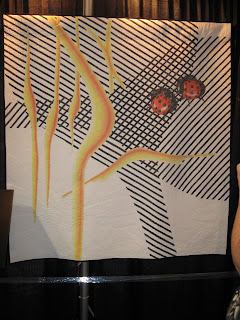 I feel your pain with the phone company. Yech. I'm green with envy that you got to go to Long Beach. Hope you had a blast!

Your box of yummy scraps was waiting for me when I got home from vacation last night. They are great -- unlike anything I have already! Thanks so much.

Hey. I work for AT&T and would be more than happy to try to get your situation worked out. Let me know how I can help you.

Ugh, phone companies are such problems. We've opted for the no land-line approach. If we had little ones then that would have to change but it's working out great for us so far.

Ah, I wanted to go to Long Beach but that was a race weekend for us. Maybe next year I can get to it. Sounds like you saw some beautiful quilts. :-)

A splendid rant and nice pictures. BTW, I mailed your mini RR to Maine this morning.