You might have seen the news about the hundreds of wildfires burning in California. Here in the urban East Bay we haven't been able to see any of the actual fires, but we've certainly seen and smelled the smoke! This was sunset on Thursday -- just orange haze. The fog has come in big-time today and it's been windy, but it still looks like smoke. 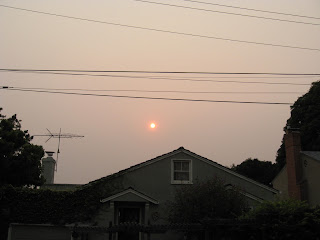 Since I've been findng it so frustrating to photograph the birds that move around constantly, I decided to look for some "prey" that would sit still for the camera. How convenient to find this snail on my dining room window today! Look how crisp the photo is! I took a picture of the other side, too... but decided you probably didn't want to really look closely at the underside of a snail. Yech. 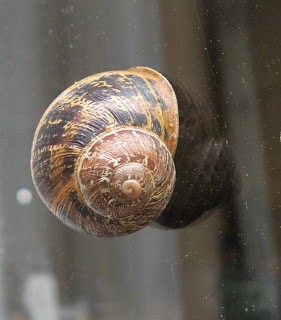 I have been doing a very little bit of sewing -- here's a little hint of my Summer quilt for the 4 seasons swap -- it's going to be a Japanese garden. 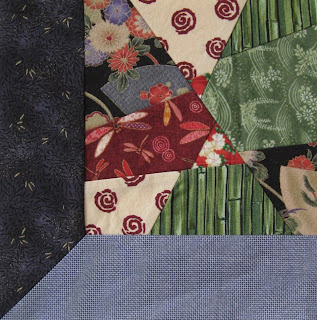 Finally, I have to report that despite the fact that I flagrantly displayed my unmentionables a few days ago, I did not receive a single bit of spam. And when I check the "referral" list on sitemeter this morning, there were no rude google searches showing up at all! As I told Sweet P, I think the fact that they were "old lady" style and made of cotton probably saved me!

That snail picture is amazing...isn't the macro setting fab on these digital cameras! I recently took a picture of a baby bird I rescued and on the original pictures you can see every feather and eyelash!
Thanks for not showing the underside of the snail...sounds like it would be a bit much first thing in the morning :o)

I love to look at all the pictures on everyone's blogs. It's neat to see what's going on around the country and world. Loved the snail, too. When I taught my class had a pet snail...Herman.

Sneak peeks are always so tantalizing! I'm trying to plan a quilt with Japanese fabrics for my niece's wedding present (she was an Asian studies major in college), and so I am especially eager to see the final version of your Japanese garden!

Sorry about the wildfires. They are really devasting this year.

The fires are toooo scarey - out here they become RANGE fires and fly across the prairies.

The snail photo is perfect! He/she? looks like a quilting pattern to me.

For some reason, I love snails. I got fascinated by them when I lived in Hawaii and swa the out all the time after the rains. I kow the can do a lot of damage, but I love them anyway.

Love the new photo of the Mourning Cloak larva in your banner!