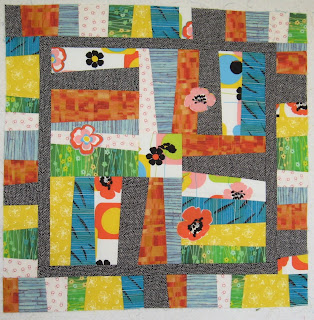 This might be my 4 Seasons Spring quilt... I just haven't decided whether it's right for the person I'm making it for. It started with a pattern called Whackie Girl that Nancy has made several times -- after her last one I had to write and order the pattern from the designer! I've appliqued a few of the poppies from that terrific spring-y fabric on top... I don't think it could be any more cheerful!

The Guild show this weekend was pretty good -- some real stand-out quilts among the "oh that's nice" and the "what on earth was she thinking?". I posted a bunch of photos on my Flickr site. (look for the EBHQ 2008 album)

Ooh, I like that - is it for me? Its a lovely carefree design and great fabric.

I can't imagine who wouldn't love that quilt! It's so fun and so cheerful. I'm looking up the pattern, too.

A fantabulous adaptation, Julie. Love it.

I just love the little spring quilt--the colors are so bright.
The guild show quilts are awesome!