Today I received a soft package in the mail with a postmark from the Royal Mail -- my "pay it forward" gift from Andrea! It is this very cool and useful sewing case -- when you open it 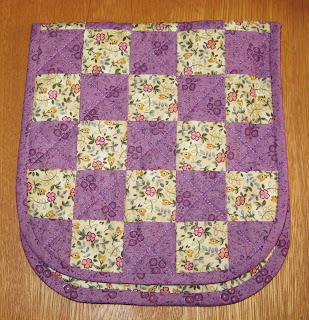 there are a bunch pockets for holding tools and stuff. And, it came equipped with a chocolate bar -- so what else does a quilter need? It's beautifully made and I'm going to start using it immediately. 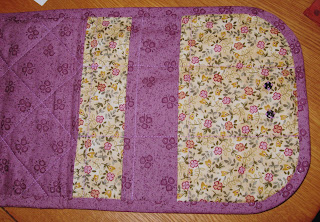 If you look at my cluttered sidebar, you'll see that I've joined the Spring Fling Round Robin, which was organized by Margaret of 4 Seasons Quilt Swap fame. It's going to be interesting, because it's not the kind of round robin where your own starting block comes back to you at the end, and no one (except Margaret!) knows who will ultimately receive each quilt. Here's my starting block -- it's 8" square, and this photo makes everything a little pinker than it really is: 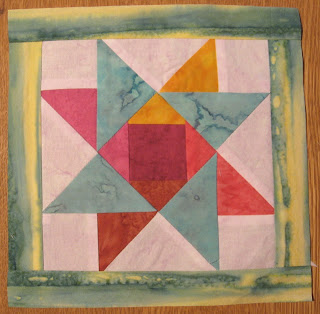 I send it to A, who adds a pieced border of some sort. She sends it to B, who adds another border and sends it along to C. C quilts it, binds it, adds the label, and sends the finished quilt to D. I can't wait to see what comes to me in a few months!

Right after I said a few days ago that I needed to finish some other things before I started playing with the Shakespeare quilt, I immediately went and cut a bunch of fabric and made these two blocks --they're called "Virginia Reel" and the quilt will have a bunch of them. I need to play around in EQ and figure out exactly how big the squares are supposed to be at a couple of places, so that I can measure and trim as I'm going along. I usually cut my triangles a little be large (like 1/8") for wiggle room, but I'm going to end up without enough seam allowance on the outsides of the blocks if I'm not careful. I ordered just a tiny bit more red Civil War fabric from Z & S yesterday, but I swear I'm done buying now! 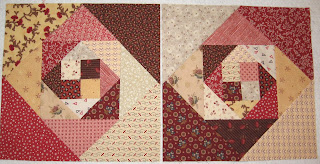 Finally, on a non-quilty note... I went shopping for a new bathrobe today, because my old one is 15 years old and looking kind of worn out. It is really hard to find a cotton bathrobe that isn't super-plush terry cloth (toweling) which is way too warm and feels like a snow-suit. I finally found a mid-weight cotton knit robe from Ralph Lauren, on sale -- I think the final price was $32! -- but the problem is: 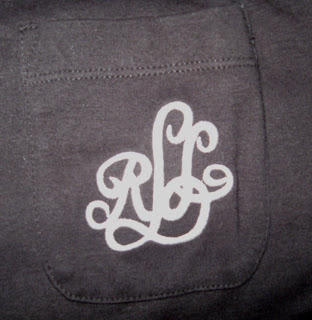 It has this huge, shiny, white monogram on the pocket! Those are NOT my initials! (LOL) So, the pocket is coming off and will be replaced with something more tasteful, but I'm not sure what. A little cross-stitch of some sort, I think. This might be one of the very few times where I'd use an embroidery machine if I had one...

Just curious - are you making your SITP a different size than Judy Martin's? Because her cutting directions are very exacting and everything fit together perfectly when I made that pattern (3X now!).

Very nice Pay it forward mail! Always fun to get a nice surprise.

Funny note about the monogrammed pocket.

I love your Virginia Reel blocks, great choice and use of your fabrics.

The finished quilt will be fabulous.

Lovely PIF mail. I like your spring block as well. Isn't it great how being able to sew makes you fearless abt being able to makeover something others would pass over?

That is a nice gifty. Very pretty. The colors in your Shakespeare quilt are beautiful. It is going to make a lovely quilt.