I spent most of the day at Pacific International Quilt Festival today -- it's about 30 miles south of San Francisco. I loaded up a bunch of photos in an album on flickr, at http://www.flickr.com/photos/floribunda52/
I did get to see Sally Bramald's award winning quilt in person... 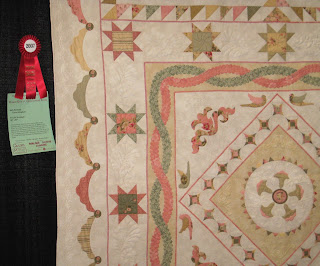 And here's a little bit of a rant -- sort of related to what Bonnie's been talking about recently. I ran across this quilt at the show: 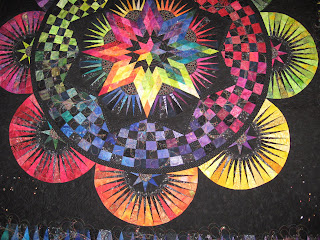 This is clearly from the Be Colourful pattern called "Circle of Life", and the quilter has pretty much used exactly the colors and type of fabric that were used in the original... however, nowhere in the description of the quilt does she mention the original pattern or the designer! 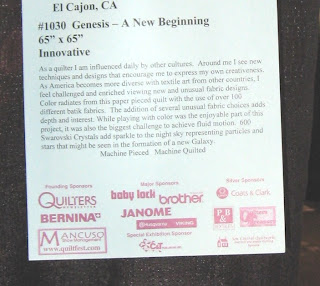 I think this sucks. There were plenty of other quilters who referenced the designers who influenced their quilts (or who out & out wrote the whole pattern!) but this writeup makes it sound like the whole thing was her own idea! I was going to leave the quilter's name in the photo but decided to crop it out...
Posted by floribunda at Saturday, October 13, 2007

It is to bad when people do that. At the quilting expo in Portland I ran into one of the longarm quilters, she was telling my friend and me how she had three quilts in the show that she had longarmed and none of the quilt owners gave her recognition for her quilting and one even stated that she (quilt owner) quilted the quilt. How sad. I hope you can understand what I was trying to say. Nice quilts, it must have been a fun show.

Thank you for showing my quilt. It's good to see it hanging after going round the shows. I worry how it shall look by the time it gets to the very last one (grin).
Sally

Ouch, nothing personal, but I always like to do my own research. I was expecting a bit more difference even after your comments. Really, it's tha same quilt, maybe made by a different hand, but still the same.

I guess it proves it is a great design though.

I agree with ferret...I went to look at Be Colourful's Circle of Life. You weren't just whistlin' Dixie when you said it was "clearly" a copy of that! Wow, what nerve! It's amazing none of the shows organizers noticed that. What a shame!

I have seen that very same quilt and very like fabrics at the Dallas Quilt Show..

It is sad when credit is not given as it should be and unfortunately, it will happen time and time again. Lovely quilts, thanks for sharing them with us.

I agree with your rant, and dot's comment about not crediting the longarm quilter. Don't you think the show is to blame too, at least partly? They need to set standards for this sort of thing, and stick to them.