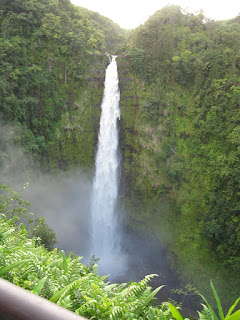 This is Akaka Falls, on the east side of the Big Island, just a bit north of Hilo. The falls are something over 400 feet high, and quite hypnotic...

We made it home from Hawaii late last night. Our United flight from Kona to San Francisco was cancelled due to mechanical problems and since the airport is so small, they had a bit of a meltdown trying to deal with everyone. We were lucky enough (after racing around and standing in line for more than an hour) to get seats on an Aloha flight to Oakland, which is actually more convenient for us. So, we had middle seats in a smaller aircraft, and got in at 11:30 pm instead of 8:30. I'm a total zombie today -- feel like I'm hungover, even though I just had one beer on the plane!

I did manage to get out and do a couple of errands; of course I ran into all the traffic for the Cal football game because I never know their schedule. I'll probably start feeling alive right around when it's time to go to bed tonight!

Computer mysteries: can anyone answer these questions?

- on my laptop, when I start to fill in my user name for blogger (for instance) it gives me a couple of options as pre-fill; when I do this on my desktop, it doesn't -- where is the setting that controls this?

- one of the pre-fills is wrong, from when I made a typo one time. How do I delete the pre-fill?

And now for something completely different: socks! I finished my first sock a few days ago, and here's the proof: 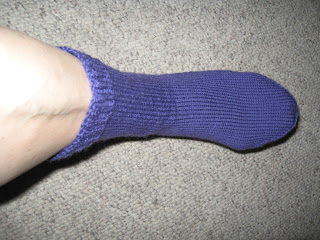 I do wish I'd chosen some more interesting yarn; this purple is sort of boring after a while. I did get one of those novice's gaps on one side where all the different angles come together, so I need to work on my technique. I think I remember Jenni from Fairybread talking about this with her first pair... 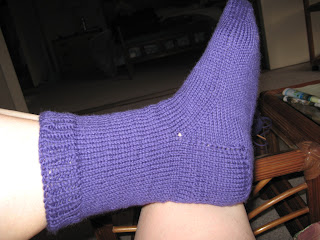 I have started the second sock, and it's about 4 inches along. I was thinking it would be cool if you could knit both at the same time so that you don't run into knitter's ennui when it comes to finishing the second one... actually, I know that Silver has an online class on a way to do this, but it's pretty much over my head at the moment. Has anyone tried it?

I'm dying to get the sewing machine out and SEW SOMETHING for the first time in more than 2 weeks. What to tackle first?

Posted by floribunda at Saturday, September 22, 2007

While I will knit both sides of a V-neck top at the same time, I have not attempted two socks simultaneously.

For the hole at the top of your heel flap, when you get back to knitting in the round, knit into the BACK LOOP of the last "sole" stitch and first "instep" stitch. It will twist the stitches and help tighten that hole. Oh, and it takes A LOT of practice to totally eliminate that hole. I'm still working on it when I do short-row heels!

I'm no help regarding your computer questions but I also would like to learn how to delete the incorrect pre-fill info.

I've been enjoying your Hawaii photos. I've never been there so I rely on photos and TV travel shows to see the beautiful place. When I was about 13 years old I went to the movie to see Elvis in BLUE HAWAII and sat through it twice because I was so mesmerized by the whole thing.

Hi There: I am a follower of your web site and noticed your question.
To get rid of the Auto Fill on the computer you open Internet Explorer..Click on Tools..CLick on Internet Options..Click on Content Tab...Click on Auto Complete Button...Click on Clear Forms...You will have to Click on Clear Passwords if you want to get rid of those also..
I hope this helps you..
Love the quilt blogs!!!!
Jocey
Canada