I spent a few days in Las Vegas this weekend at a quilt retreat for a small online group I belong to -- we're hoping this is the "first annual". There are about 17 people in the group, and 6 at the retreat. The hostess prepared a mystery for us; it involved a lot of prep in the form of squares and half-square triangles, and then we spent all day Saturday sewing... and sewing... and sewing. None of us finished -- but here's a picture of the three main blocks that make up the final quilt: 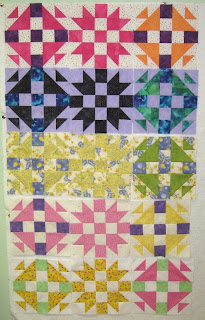 I love the way everyone came up with different fabric choices -- my blocks are in the second row, by the way. They're a combination of batiks and a pansy print and some marble-y stuff, mostly from my stash.

When I got home, I finished up my chain event mystery (from A Pocket Full of Mysteries) and it's now on the wall. I'm calling it "Icicle Chains". The quilting is all straight lines-- I thought about trying to do something fancy in those empty squares, but it just didn't seem to want it. 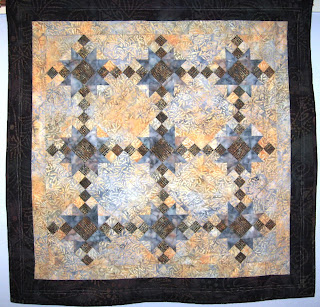 And -- I finally found some border fabric for "Neutrality"; it's a little bit hard to see in this picture, but its a creamy, toasty print in the "Folklorique" line by Moda. 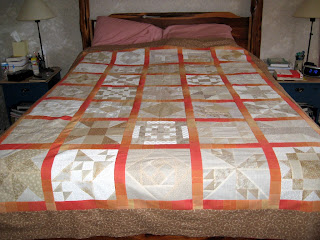 And finally, here's the retreat mascot, Destiny. She was a real doll when I was going through cat-withdrawal this weekend -- she's very affectionate and sheds just like my Bucky does, so I felt right at home! 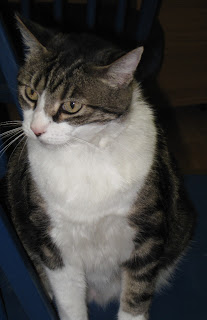 I'm not excited at all about going back to work tomorrow. Isn't it time to retire yet?

Jenni asked for a picture of my chevron scarf, so I'm obliging her... keep in mind that this hasn't been blocked so it's a bit wobbly!

This is an incredibly popular pattern these days -- it comes from a book called "Last Minute Knitted Gifts" by Joelle Hoverson. This probably takes longer than anything in the book; it's quite easy but you still have to pay close attention every 4th row. I'm using two colors of Koigu hand-dyed wool, which is wonderful to work with and seems to be going a really long way! I think this is about 2 feet long -- hope to have it done by the time the weather gets cold again. It's a good bus and airplane project since it's so compact.
Posted by floribunda at Monday, May 21, 2007 2 comments:

I've made some progress on a couple of tops. First is the 4-patch stack & whack from a couple of months ago -- it's now totally wild with sashing and border. I think this needs to go to a 12-year-old girl, but I don't know any at the moment so it will go in the closet for a while! I'm involved with two mini-groups; this was a project in one of them, and now the other group wants to do the same thing -- so when we meet in June I'll have more pictures to show you. I've chosen a more traditional floral print to use for the next one. 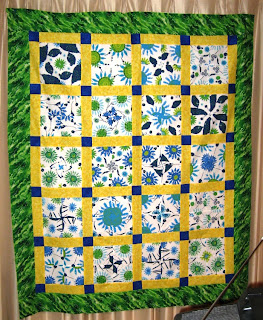 And now for something completely different -- this is the row robin that my online group finished in February. It took me forever to figure out what to use for sashing! I tried out dark brown, medium brown, a combination of tans... but they all looked terrible with the wide range of neutrals in the blocks, so I finally decided I needed to move to a completely different color. I love the way this variegated stripe seems to shimmer but still lets you focus on the blocks. 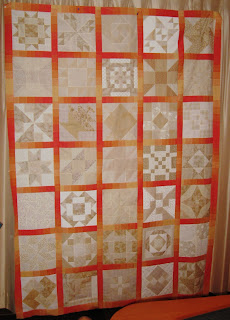 Now my question is about the outer border. I have this beautiful chocolate "krystal", but *I'm wondering if it's just too dark? Comments, please? 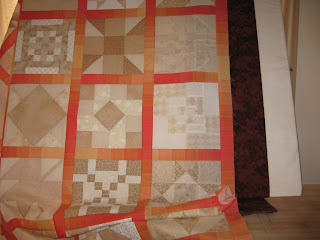 It is a fabulous spring day today, and I should be out cleaning up in the back yard... or doing some work I brought home, or trying to file the mound of paper on my desk. Yawn. Maybe I'll go pick some oranges and lemons and make lemon-orange-ade so that I'll have something to look forward to later in the afternoon when I decide it's okay to just lounge around with a book!

After how long -- 3 months? -- I finally set up my new (used) Handiquilter last night. Foolishly or maybe just optimistically, this morning I loaded on a quilt top destined for charity, thinking that if my work was a bit amateurish it would still be okay. NOT! Amateurish doesn't begin to describe it... First my thread broke about every 4 inches, then it started skipping at least half the stitches. Of course it didn't help that I kept forgetting to drop the presser foot, so I also had snarls of thread underneath.

The good news is that thanks to the wonderful people on Yahoo's Brother 1500 list, I got tips about needles, thread, bobbin tension, deep breathing... and it's going much better now. Chocolate helped, too! I unloaded the quilt top, went and bought some #16 jeans needles, found a couple of yards of cheap stuff at Joanns to practice on, indulged myself with a new magazine...

Here are a couple of photos of my set-up: very cramped! 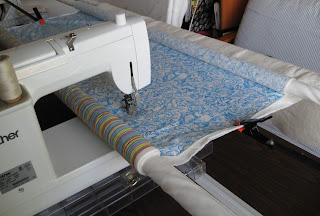 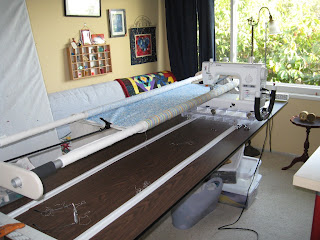 And, a technical question for you digital camera whizzes: when I fist turned the camera on this afternoon, it took photos like this: 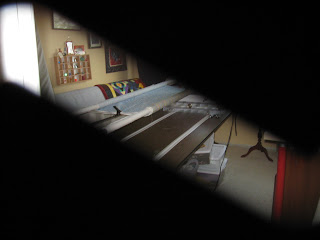 There was no error message and no low-battery message. After stomping around a bit, trying to find something in the 500-page manual, and trying to find a "help" function on the Canon website, I decided to change the batteries. It looked the same, so I turned the camera off and thought about how much I didn't want to go back to the store. Then I turned the camera on again, and it was fine! Does anyone know what this is all about?

I found out recently about a project called Red Sweaters -- they are collecting tiny red knitted or crocheted red sweaters to use in art installations inspired by the war in Iraq. "Its purpose is to spread public awareness, encourage thought, and inspire discussions about war and current events without promoting a specific view. " They are trying to collect enough sweaters to represent the number of American soldiers killed in Iraq. Patterns are provided. The photo is my first one --
Posted by floribunda at Saturday, May 12, 2007 4 comments:

I do a lot of those "blog quiz" things and then never post them. This one caught me though because it pegged me in only about 10 questions! And, it's the same personality type that I tested as 25 years ago when I first did the whole long Meyers-Briggs thing.

How Rare Is Your Personality?
Posted by floribunda at Wednesday, May 09, 2007 1 comment:

It has been a while. In the meantime I've been playing around with my sister, who left this evening to go home to Tasmania. I probably won't see her until Thanksgiving 2008, which is a big birthday for her -- Al and I are plotting a trip to New Zealand and Tassie.

And, I also spent a few days at some business meetings in New Orleans -- hadn't been there for about 14 years or so. Hot, hot, steamy and hot. I don't understand how all those guys could stand to wear business suits!

I had the obligatory beignets and cafe' au lait at the Cafe' du Monde; tried to get a muffaletta for early dinner one night but the Central Grocery sold their last one to the guy ahead of me in line (sniff); and managed to avoid all offers to take a "Katrina tour". I would have liked to go down a day or two early and get involved with one of the rebuilding projects, but my schedule just wouldn't permit.

My youngest brother has been living in New Orleans for the last year, so I also had the chance to see him & his family (3 kids 8-and-under and another on the way, and not for any religious reasons, either!) We had an adults-only dinner one night at a very cool restaurant called "Fire", which is in a refurbished old firehouse. I had my camera in my suitcase, but not-so-cleverly forgot to take it with me to his house.

I think I finally found the right sashing for my neutral row robin quilt, and you'll be seeing a picture soon. I've also sashed the very-bright 4-patch stack & whack blocks and will be adding the border this week.
Posted by floribunda at Saturday, May 05, 2007 1 comment: