First things first -- here's the FABULOUS quilt ladder that's been in the works for a while. This is one-half of a huge old ugly ladder that we found in the back yard of a friend's new house. We cut it in half and brought it home, sanded for a long time, added 5 coats of varathane, and voila! It doesn't have a final resting place yet, but hubby Al set it up in the dining room before leaving for a 10-day business trip. (if you look closely, that's a picture of Al on the side table -- which is actually an old cast-iron Singer) 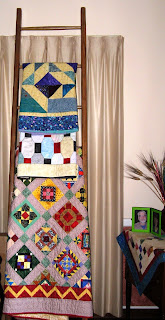 Al did a job transition recently, which prompted us to change health insurance plans -- we'd been paying our own way with an HMO for a few years and now we have a corporate PPO. This saves us about $500/month, which isn't too shabby. It did require finding new doctors, though -- what a tough process! I got recommendations from a few friends: one isn't in our plan, one isn't taking new patients, one asked a bunch of personal questions and then took 3 weeks to decide whether she'd accept me as a patient (with the first appointment being available in July!).
So instead I looked at the list provided by the plan -- decided my doc had to be female and near my age or older. I wanted someone who might have actually experienced a hot flash or two! I picked one of the two or three who fit these requirements and was warmly accepted by the receptionist with an appointment within a couple of weeks. I met my new doctor this morning and it was such a pleasant experience -- she asked lots of questions, listened to me, and had a sense of humor, too! Now I just hope she doesn't decide to retire anytime soon...

I'll close out with a few more garden pictures, just because I'm loving my new camera so much. Here's a "Golden Wings" rose, which is going bananas this spring: 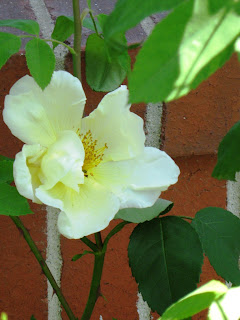 This is the bane of my rosy existence: a rose curculio... that little red bug. These show up every year on just a couple of the bushes; they damage the buds of new flowers. Sometimes I stand around with a container of sudsy water and try to catch as many as possible, but I always miss some. And, they have the annoying habit of dropping off onto the ground as soon as you get close! 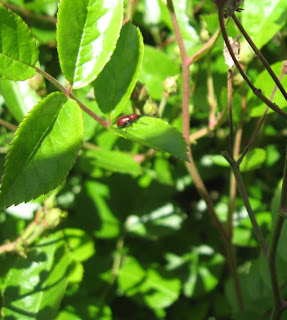 Finally, here's Ingrid Bergman, one of the loveliest of the dark red varieties. Happy Spring! 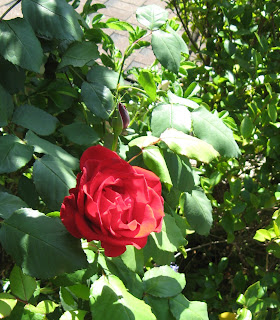 The quilt ladder looks like a wonderful way to display quilts. Finding a good doctor is worth a lot. I really like mine. We are so lucky here to have Medicare. We just go to the DR and don't think about paying.

I love the quilt ladder. I so want one. Well, maybe when we get our new house.

It can be tough to find a new doctor. I love my doctors and can't imagine trying to find new ones. But, if it meant saving $500/month I could do it.

What a great idea using a ladder to display quilts.

Love that quilt ladder. I've been wanting to made something similar for a long time.

Great job finding a doctor who "fits" you. I recently found a new one too. With many of the criteria that you were looking for in yours and I just love her! So much better than the old doctor who was good but I never really felt like he LISTENED to me.

I had to find a new doctor fairly recently too, and my approach was to find a female who was MUCH younger than I am so I won't have to go through this again! And she's great.

Wow - you have a ladder also. My DH made me one months ago. It's great to get some color in various corners of a room! AND a way to display the quilts without being too obvious.

Great ladder - actually a dirty old thing from the barn? It sure came out beautifully - you workd hard on that.

I love your ladder. I thought it was one of those that narrows at the top but see it is just a ladder...:D. Health stuff...insurance stuff...ick.

Lovely to see your quilt ladder finished. Great idea for display and lovely quilts too :)

The quilt ladder is such a great idea. And the quilts on it are wonderful.

Why would you need to find a new doctor. Wouldn't it be better to continue to go to a doctor that had your history and you were familar with?