I've been trying to follow Brenda's wonderful tutorial for adding a custom banner to my blog, but it won't seem to accept photos "parked" in yahoo anywhere. So then I started reading the Blogger stuff, and at least figured out how to add a picture which can be "parked" on my own hard drive. Next step is to doctor up one of my photos to include the blog name, so that the banner looks a little more integrated and snappy! Maybe next weekend... in the meantime, there's a picture of "middle of nowhere, Scotland" that I particularly like.

More technology woes: also, I trashed the USB cable for the digital camera and I've been too ticked off to order a new one for $47.38. Apparently it's special! So, the drill now is to put the memory stick into a special floppy disc; insert it into my husband's old computer which still runs on Windows 98, email the photos to myself so that I can open and edit them on my computer which has XP... Sony never updated the driver for the memory-stick thing to work on XP, or at least it doesn't work on my XP and they can't figure out why. Another few days of this nonesense and I'm going to break down and order the new %$#* cable!
To go along with last week's garden photo -- here's another one... this is a Fremontia -- another California native that loves our dry summer weather. In fact, it's not at all happy if it gets watered during the summer. (We usually have no rain from mid-April to the beginning of December!) 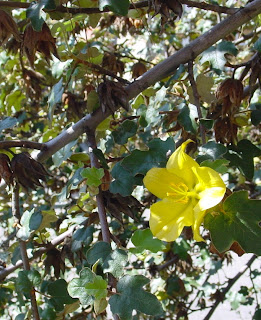 And this is a picture of the baby quilt I finished up -- I washed it to soften it up a little, and I love the poofy look! 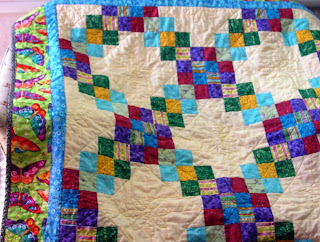 Lovely flower and a cute, bright quilt too!

I FEEL your computer pain! argh! I have been trying to add a site counter onto my blog with no luck. I wish I understood HTML. I'll give it another go later with the help of another blogger who has so offered. Pretty quilt! :D

Thanks for the link to Brenda - I saved it for future consideration - LOL.
Boy does it ever look complicated, I don't think even with step by step instructions it is something I can do but I might give it a try.

Hi Floribunda! It looks like your banner image had been posted to Blogger (it has a Blogger url). Please do let me know how and where you inserted the image in your template code so that I can share this with others. My tutorial works fine for images that are posted on a personal server but images posted on Blogger/Yahoo/Webshots etc are blocked out.

Goood luck with the banner. I copied the address to begin to commence to start to plan to do it also, but ...