I belong to a small online group that does a variety of quilty swaps. A while back I organized a round robin and a row robin -- and ended up participating in both! I posted a photo of my round robin back here; and now my rows have come home, too! (here's the post with my original row) And here are all six rows: 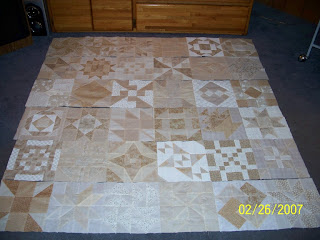 I absolutely love this, even though it is so different from all the brightly-colored quilts I usually make. Or maybe because it's so different... I'm planning to use a slightly darker brown sashing and a rich burnt-0range for cornerstones. And I know I don't have the right fabrics in my stash, so-- oh boy -- a bona fide reason to shop.

Here's a picture of my latest Lazy Girl Designs "Towne Purse" -- this is a late holiday gift for my massage therapist (who's also a quilter!). She provided most of the the fabrics -- fishy stuff to remind her of a recent vacation in Hawaii. 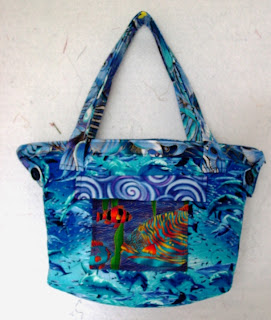 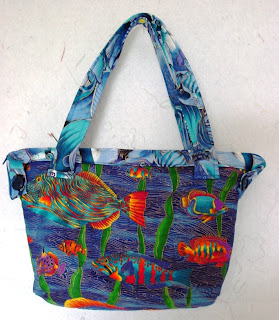 I've done a few quilty things lately, but mostly I feel like I'm in a slump. Probably the weather, and too much work... I'm just not getting excited by the projects I've already started, and haven't had the energy to dive into something new. Humph! 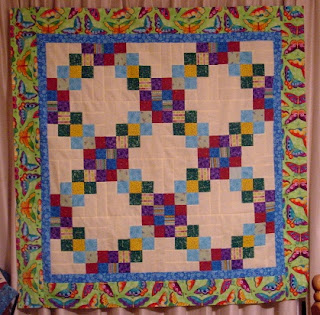 Here's what I have done: finished the top of a "bits and pieces" baby quilt from the Quilt-in-a-Day book of the same name. My husband took a look at this and asked if it was called the "88 quilt" -- so I guess that's going to be its name. I decided that I don't like the Eleanor Burns strip-piecing method, because I have a hard time keeping things "square" when I cut the strips into pieces. I prefer the Judy Martin method of cut first, then sew for more accuracy. I think this is going to be for a step-sister-in-law's first baby, due in May.
I know that she's really into neutral colors, though, so this might be too much of a shock for her. I have another, 30's repro quilt I could give her instead -- I'm not a huge 30's fan but I really like this one and it was insanely easy to make. It's one of those things where you make big nine-patch blocks, cut them in quarters, and rearrange the pieces: 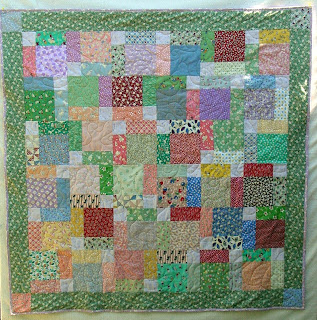 Here's a gratuitous cat picture: the towel is there for Bucky to sleep on, but he only remembers that about half the time. If I notice him sleeping on the quilt and put the towel on top of him, very often I'll come back a few minutes later and find him on top of the towel! 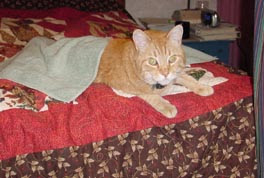 A friend of mine bought an old house recently, and in the back yard was a 20-foot wooden ladder which she planned to take to the dump. No way! My husband had promised to make me a quilt ladder for my birthday (2 weeks ago... he gave me an I.O.U. for it) -- so we cut the ladder into two 10-foot sections and brought it home today. He cut the rails at the right angle to lean against a wall and started sanding it -- I haven't decided whether to paint it or just apply some natural-look finish to it. I'm excited to have someplace to display a few (more) quilts -- heaven knows where there's room -- and I'll post a picture when it's up and running.
Posted by floribunda at Saturday, February 24, 2007 10 comments:

It's been a while since my last post -- in the interim I did a marathon business trip (4 countries in 5 days) and finally feel like I'm over the jet-lag. I've gone through sewing withdrawal, too! It's amazing how relaxing the sound of the sewing machine is after a long day doing things you don't really get excited about.
I took a little knitting project with me on the trip but never really worked on it. I did read a couple of wonderful books, though:
"The Girls" by Lori Lansens, about a set of conjoined twins, and
"Flesh and Blood" by Michael Cunningham, about three generations of an American family. Both thoughtful, beautifully written, a tad emotional... 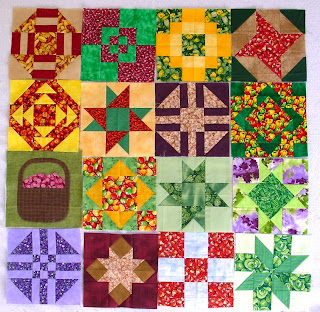 This is a picture of the blocks I received in a "birthday block swap" in one of my little online groups. The deal is that you send everyone a piece of fabric and they make you a block. I sent each person a different fruit or vegetable fabric (double helping of garlic, you'll notice!) -- and now I'm trying to figure out an interesting way to sash/set/border them... all suggestions gratefully accepted!