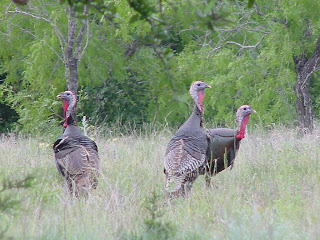 I had an interesting ride today... I drove out east through the tunnel towards Walnut Creek, to visit my favorite shopping experience -- Target. Cruising along in the second-fastest lane of a 4-lane section of freeway, and all of a sudden there are these alien creatures standing in the fast lane. Luckily there were no cars in the fast lane at that point, 'cause these fellows didn't seem to be inclined to budge! How on earth they managed to get there without getting killed, I do not know. I couldn't believe how tall they were -- I think my jaw hung open for a good ten minutes after that. 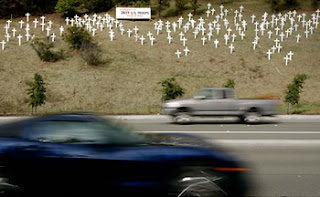 And then I remembered that I'd been reading about an Iraq war protest/memorial right near the Lafayette BART station, but somehow hadn't managed to see it even though I've driven out that way a number of times in the last few months. This is a photo from a while ago when there were only 300 crosses; it's meant to commemorate the U.S. military men and women who've died in Iraq -- over 2800 at the time this photo was made. Today there are many more crosses and the sight is pretty overwhelming. There's been a lot of controversy about this, including individuals going up and knocking down the crosses and/or sign and the town of Lafayette flip-flopping about whether the sign is legal -- but so far it's still there as a reminder of our losses. 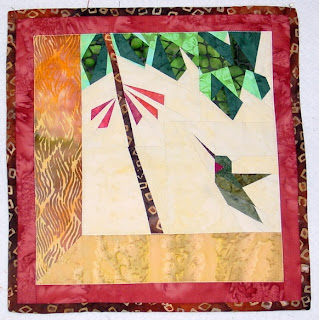 And to end on a quiltier note, here's a picture of my first journal quilt for the 12x12x4 challenge -- it's for a series called "looking out my kitchen window" and it's my first attempt at designing my own paper-piecing pattern. It needs some embellishment, I think, so I'm planning on a collage of leaves of some sort -- I'd be happy to entertain any suggestions!
Posted by floribunda at Saturday, January 27, 2007

We used to feed wild turkeys in our yard near our bedroom window before we got a dog. If we were slow in the morning they would actually tap on the window with their beaks. Strange birds! THe journal page looks great. I am not much for embellishing so no help there but I will be watching to see what you do.

Are those turkeys on the highway? What the heck were they doing there? I would think there would be buzzards on the highway but not turkeys. That is strange.

WOW - love the hummingbird! We have lots of them in Arizona, and they always remind me of my grandmother...who by the way lived most of her life in Los Gatos, CA!

Those turkeys sounds very lucky... and the journal page is beautiful!

Oh I love your hummingbird how beautiful :) Turkeys not so pretty but neat to see huh? LOL xoxo melzie

I love your little bird - interesting to make your own pattern for the paper piecing.

The turkeys are so cool. I hope they got off the freeway again in one piece. They can fly for short distances, I understand. When you said going toward Walnut Creek for your favorite shopping experience, I thought you meant the quilt shop (though I like the one in Lafayette better, if it's still there). I've been in that Target, waiting for the rush hour traffic to dry up! =)