My husband and I have been married for 16+ years. We get along remarkably well, considering how different we are... I joke about it being due to the fact that he travels so much, but that's probably not really a joke! Since we were both in our late-30's when we got together, and it was the first marriage for both of us, we had a lot of time to get things out of our systems and learn how to be independent. We both work, keep separate bank and credit accounts, have no children, and he's really even-tempered -- all those things help, too.

BUT (and you knew there was a but coming!) he is an absolute clueless fool sometimes. He's kind of the absent minded scientist type -- can go for weeks without looking at his mail; if I didn't pay the bills we'd be in big trouble. And what did he do this time?

He took my quilt to the post office on Tuesday to mail it to Road to California. I packaged it up and gave him instructions about delivery confirmation, insurance, and when it needed to be there. I had priced it online and figured that "Priority" would be just fine.

He came back later that day and said he'd sent it "Express" at twice the price because the PO couldn't guarantee that "Priority" would get the 400 miles from here to there by January 5. Okay, cool. But... he has no idea what he did with the receipt! So I have no way to see if it arrived, and no insurance recourse if it gets lost or damaged! I know that he probably just mindlessly crumpled up the receipt and threw it in the trash on the way out of the post office, but he has no recollection at all.

(I did send an email to the Road2CA office to see if they would tell me if it had shown up -- my past dealings with them haven't been very satisfying, so I don't know whether to expect an answer or not; their office seems to be understaffed with surly people!)

I'm sure I'll calm down any minute now! We're having a big Chili Fest tomorrow, so I've got to go get started by chopping a ton of onions. After that, I'll be in a really good mood!


Postscript: 3 hours later... I've been very good about all this, really! No yelling at all, just a calm suggestion that he look in his jacket/pants/shirt pockets for whatever he was wearing that day -- which he assured me he had done several times! Just now, he came in and handed me the receipt. pause. where was it? pants pocket. gotta love this guy!
Posted by floribunda at Friday, December 29, 2006 9 comments: 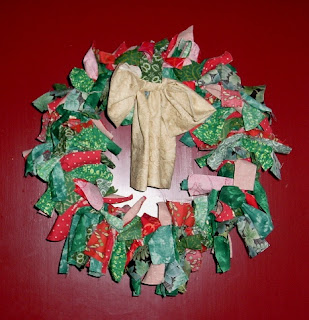 Blogger is being a PITA this morning. If I sign in to beta-blogger, it won't let me add pictures -- just keep saying "sorry, we couldn't complete your request." After scrolling through a couple pages of their help board, I found a suggestion to sign in under "old" blogger instead of "new" blogger... and the photos worked!

Anyway, after that little rant... Merry Christmas! The photo is a scrap wreath I made this year, f0llowing an idea at gotfabric.com. Mine looks a little more scraggly that their example, but at least it's not dropping needles all over the porch.

This is what I did yesterday -- it's the annual Christmas mystery from A Pocket Full of Mysteries, except that I turned the blocks arouhd to form a diamond instead of an "X" in the middle. The focus fabric is splotches of paint, and I think this will be a baby gift for one of my sisters-in-law later in 2007; one's expecting her first at the age of 43(!) and the other's expecting her fourth (equally !) 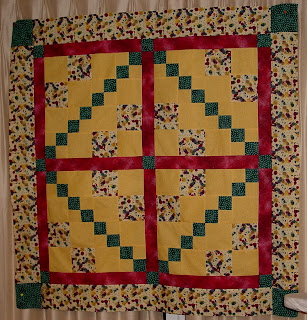 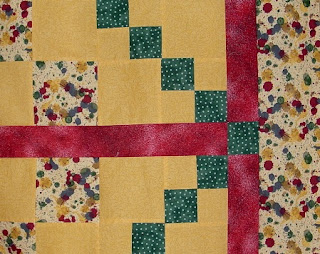 switched to Beta, that is... so far it's been easy, although their "drag and drop" formatting isn't doing what I want, so I guess I'll need to wade back in and mess with the html. I'm used to having my posts on the left and the sidebar on the right, but blogger doesn't want me to drag those things around -- or maybe I'm just dragging them in the wrong order! **

I also noticed that my date & title stuff was disappearing intermittently when I tried to change the font and color. And yes -- I realize it's a bit of a rainbow at the moment, but I had to go a little crazy after all that black type for all these months.

And, I don't quite get the whole labels thing: I think I might have about 3 categories: blogger rants, quilting, and travel. Hopefully not in that order!

the gift parade .. and my braggie!

I'm moving right along on the gift thing... finished up the last 3 "Sassy Bags" today, for a sister-in-law and a friend and her daughter -- hope they like them! Yesterday I found out that I drew another sister-in-law's name for the gift exhange on my husband's side of the family, so I'm thinking about whipping up some placemats of some sort.

This next photo is the row robin I just sent off -- I did the row of Darting Birds at the top. It was one of those blocks I had looked at for years but hadn't ever made one -- I think they're pretty cute! I keep thinking that one day I'll go through my copies of all the "Around the Block" books and make one of each... ha ha ha. 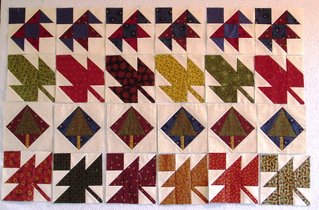 And finally -- my Braggie! After two of my local friends submitted quilts to PIQF without telling me -- and got accepted -- I was really jealous. So, I submitted my Nearly Insane quilt to Road to California at the last minute, and just received my acceptance notice a couple of days ago! I'm totally jazzed, of course, since it's the first time I've tried to put something in a juried show. And, it's a good excuse to go to the show for the first time. Any of you out there in blog-land planning to attend? I'll probably go down on Saturday and come back Sunday afternoon, late enough that I can pick up my quilt and avoid the extra mailing charges. 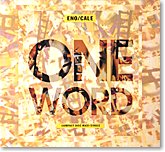 I stole this from Nancy's blog and thought it was very interesting and scary and fun:

Describe me in ONE WORD...just one word! Send it to me only, and then send this message to your friends and family and see how many strange things people say about you!. . . .This is really fun! Just hit "Reply" and send me my one word back. Then forward this message on to your friends (including me) and see what they say about you!. . . .GAME ON!! This will make you laugh out loud.

So, I sent an email out to a bunch of friends & colleagues and a couple of siblings (who didn't respond) and my husband (who didn't respond -- said he needed to know "what context"!) and received a list of words...
- cautious
- wise
- feisty
- precise (twice!)
- logical
- efficient
- fun
- generous
- renaissance (woman)
- ubiquitous
- multi-dimensional
- kind

At first I was sort of bummed out because there seemed to be too many left-brain words. I know I'm logical and efficient and all that, and I do sort of pride myself on those attributes -- but it bothered me that that's what people were seeing! I'm an artist, dammit! Or at least a crafter! But then some of the other words showed up and rounded out my personality a bit!

I'm not sure what Celeste meant by "ubiquitous" -- but the rest of them shoes do fit...

In other news -- if you use spell-check in Blogger, it tries to change "blog" to something else.

And finally, some good Round Robin news -- here's a photo of my robin that came home today. I started out with some fabrics from the American Tinware line by Andover a couple-three years ago, which I'd been hoarding for no particular reason. Three others worked on this, and I really like the way it came out! It's about 30" square right now. I'm going to do one or two more borders, including some more of the center fabric -- after I finish up the rest of the stuff I need to do this month. 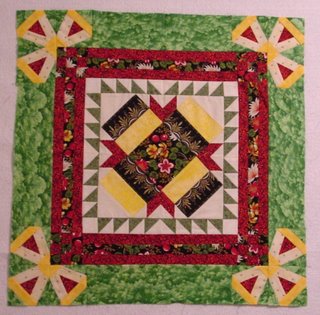 Here's a quick update on a previous post... the pattern I mentioned for a bag similar to the one I showed (the Borsa Bag) is at: Bali Bag My version didn't have knitted squares, though -- they were all fabric. My top was quilted with batting, and then the lining was attached separately, and the handles were a little different, too... I think you could probably get the Borsa Bag pattern from the designer, at: meredithburns@sbcglobal.net -- I know that some of the stores sell it, too.
Posted by floribunda at Friday, December 01, 2006 3 comments:

How did December get here so fast? Is that just another one of those things, like my doctor keeps telling me, that just happen "when you get to a certain age"? All I can say is "slow down!"

I finished up a couple of my November projects at the last minute, but am happy to be able to cross them off my list. First is a baby quilt from Dorothy Young's "Spring Breeze" mystery earlier this year . Opinions, please: do you think the colors are okay for a baby boy? I'm not sure about the amount of purple, and the border has some pinky stuff -- maybe I'll save this one for the next girl that comes along. 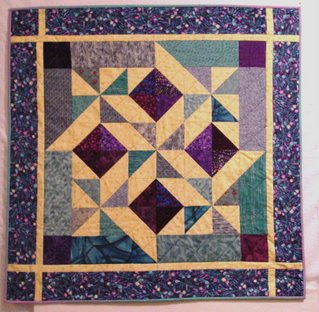 Next up is the final row on a row robin -- I love doing braids, and I felt that it was a good way to get a little more color and spark into this one. I still have a row robin in process, but I have a couple of weeks to get the current row done... 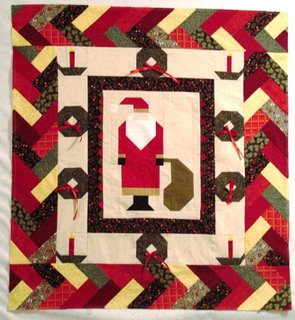 Everyone's starting to talk about goals for 2007. I don't think I have goals for specific quilts -- other than to continue trying to finish some UFOs -- but I keep thinking I need to be less of a quilty dilletante. By that I mean that pretty much every quilt I make is different; I don't have a a "style" of my own. I'd like to try working on a series of some sort, or at least a process where I can see some continuity from one project to the next. I'm not sure how to do this, really, but it's what I'm going to be pondering in the next month or so...
Posted by floribunda at Friday, December 01, 2006 15 comments: