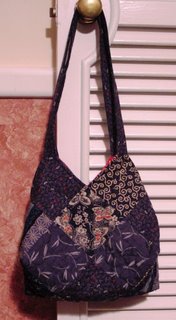 I am now going to go finish the border for a round robin, and dig out my boxes of already-cut strips for a little minigroup exchange this weekend: I'm supposed to have a little baggie of strips for each of the other 4 in the group -- the theory being that it's more fun using other people's scraps!
Posted by floribunda at Tuesday, November 28, 2006 8 comments:

Not too much quilty news to report -- just feeling like a slug because of not posting for so long! I've got lots of little things half-done. I spent Sunday afternoon working on blocks for a row-by-row and thought they were done until I went to tidy them up and discovered that half of them were hopelessly wonky. I was using the "mill wheel" block from Judy Hopkins' "Around the Block" (one of my favorite series!) and since everything in the block is "on point" I find it impossible to figure out what size to square the components to -- the end result being that if I squared the block to 6.5" I would cut off most of the points.

I drafted it up in EQ5 and decided to paper-piece three of them in hopes they'll come out better this time. If not, I'll find another block to do!

Finished another purse -- photo to follow. I used a different designer's pattern for this one, and the instructions were no comparison to Lazy Girl's. The illustrations were poor, and one part of the instructions was completely wrong! I sent an email to the designer and got a nice reply -- sounds like she's making some corrections.

And, an update on the Thanksgiving dinner front... the ex-husband and two kids are coming; the ex-wife has decided to go elsewhere. So it'll still be a little wierd, but at least it won't be a hostile environment! Whew!

We're leaving to go up to Portland (OR) the day after, for a long weekend. Excellent planning, since it will probably be raining the whole time. We've got a little wine-tasting on the agenda, along with a drive up the gorge and a trip to Fabric Depot! If any locals have great restaurant recommendations, or other things to do when it's raining besides hang out at Powells -- be sure to let me know!
Posted by floribunda at Tuesday, November 21, 2006 6 comments: 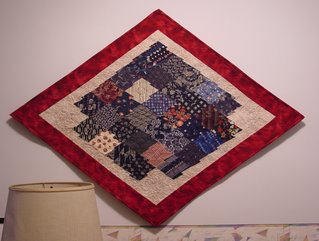 I finished up my Japanese Puzzle quilt last night and figured out how to hang it -- it's got a triangular frame made of dowels and flexible tubing. Thank goodness for old-fashioned hardware stores! 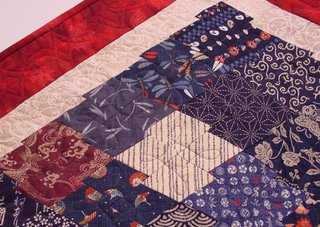 I don't usually show close-ups of my quilting, since I usually don't do anything very interesting... but I do sort of like the way this came out. Each of the diamonds has one of those loopy things in it; the beige border has stipples, and the red border has a border-ish design. I've discovered that the stencils I've been collecting do work pretty well with a chalk pounce, if I don't try to mark too much at once. For the red border I just marked the arcs with a white pencil and did the rest freehand, so I could mark the whole border at one time.

I'm continuing to plug away at my round robin and row robin, although the group seems to have agreed to extend the deadlines by two weeks for November and December -- so I'm not feeling too rushed.

My more immediate concerns center around Thanksgiving dinner... who's bringing what, and will our good friends (now divorced and in mediation over financial issues but still both planning to show up with their two kids) behave themselves? It's just a little too stressful for my taste. After a long phone conversation with the (ex) husband, my hubby came in and said "could we please never get divorced?" -- gotta love that guy!

Thanks to Average Jane for this one --

You are The Wheel of Fortune

The Wheel of Fortune is all about big things, luck, change, fortune. Almost always good fortune. You are lucky in all things that you do and happy with the things that come to you. Be careful that success does not go to your head however. Sometimes luck can change.

What Tarot Card are You?
Take the Test to Find Out.

I'm recovering from election day today. Overall, the results nationwide made me very, very happy... but my local library bond measure, which needed a 2/3 majority to pass, fell about 2,100 votes short at 63.5%. Very disappointing! I've been on the campaign committee and we've worked really hard for the last two months.

Our local newspaper, which is really pretty awful, came out against the measure without even talking to anyone on "our" side -- they printed an editorial with a ton of mis-information provided by the local coalition-to-oppose-everything. I bought a subscription not too long ago, thinking I should support them -- but it's going to get cancelled as soon as I remember to call them up!

There's been an old poem running through my head, but I could only remember the concept and not the poem itself.... it's about November, so I Googled "poem november" and up it came! November - the miracle of modern technology. Now, if I could just find that old song (late 60's, early 70's) about a jazz combo that included "wild man of Borneo on drums".

It's definitely November here -- we had our first rain this week, the leaves are finally turning, and oh! it gets dark before I leave the office, which is really depressing.

I've been sewing bits and bobs of things. One of my plans for this month is to make purses for the various female relatives & a few friends. Here are a couple of the new ones I've finished. So far, they're all from Lazy Girl Designs, although I might just branch out a little...

These tropical bags are part of the "Pursenickities" pattern, and they're for my step-mother-in-law, who like to take cruises. These were insanely easy to make! 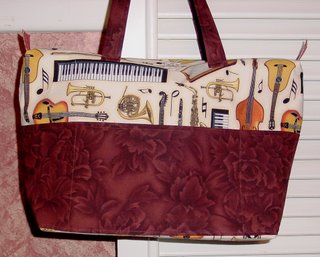 This is a "Summer Tote" for my mother-in-law, who's a professional cellist. You might notice that I have TWO (count 'em 2) mothers-in law -- which would be much less amusing if they didn't both live 2,000 miles away! Actually, they're both perfectly nice, but...

The Summer Tote would have been easy except that my sewing machines didn't like it. You fuse two pieces of cotton together with a product of your choice, and I chose the wrong one. I used the heavy-duty Heat & Bond -- which turned this into something like awning canvas. I kept switching to larger needles, and tried two different machines, but I still had a lot of trouble with skipped stitches. If I make another one of these, I'll use something much lighter, like Stitch Witchery. Also, the handles seem a bit floppy and insubstantial compared to the heavy body of the bag, so I may take them apart and try to beef them up somehow. 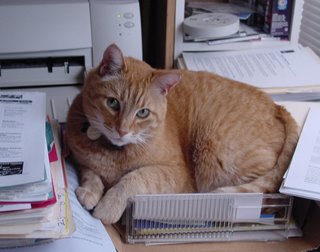 Finally, since everyone's been showing off their cats lately, here's a picture of Bucky, hard at work. He's usually pretty good about not sleeping in my fabric (and I'm pretty good about keeping the door closed!) but he does like to hang out on the desk and explore underneath among the tangle of wires.

Tomorrow is a quilt day with one of my mini groups. I think I'm going to take a break from the things on my to-do list and play with a smaller version of Judy's Leaf Season hour-a-day quilt from last month.