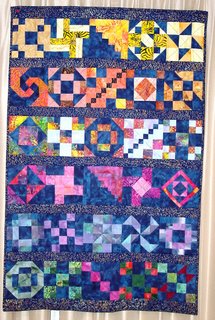 A few people have commented on my willingness and even enthusiasm to do "Robins". It's true there are a lot of horror stories floating around, and I've witnessed some ugliness myself! In one group, one participant just buried two or three sets of round-robin projects in a drawer and it took a mail-fraud charge against her to get her to dig them out and return them. Luckily, I was one of the ones whose project she worked on before other events overtook her.

Another row robin I was in was billed as "all batiks" -- but the swap hostess had a little freakout along the way and her rows all got done in cheapo marble stuff instead of batiks. You know, it would have been perfectly okay if she had just communicated with us -- a mix up, just can't afford it right now, whatever -- instead of pretending that we wouldn't notice the difference. But, I ended up re-doing her row in my own batiks and it's pretty much one of my favorite quilts! These blocks are all 6". 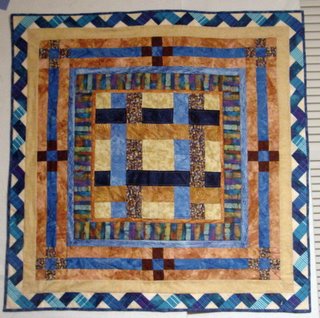 This is the first row robin that my local mini-group did. I picked out one fabric (it's a small brown & blue geometric print) and gave everyone a FQ -- the rule was that some of it had to be used in their center block. They all came out SO different. I was going to add a couple more photos of others from this group, but now Blogger isn't cooperating.

As a side note, BlogLines was looking for users in the San Francisco area to come to a focus-group thing next week and talk about service. Of course I signed up to go (and collect $75) but I haven't heard back.


Here's one more round robin to entice you... 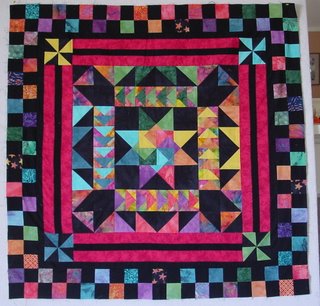 another of my favorites. I made the center star using a packet of hand-dyes that I bought in Australia (in the middle of nowhere!) several years ago. I just love how bright it is and how the colors flow.

So, are you convinced yet? I've decided to sponsor a round robin for "virgins" one of these days -- watch this space, and if you've never done one it just might be time for you to take the plunge.
Posted by floribunda at Thursday, September 07, 2006

Thanks for sharing - these are all beautiful! I am a round robin virgin and doing exchanges, challenges, etc. was one reason I wanted to start blogging! Count me in if you get something going - as long as no one minds forking over the postage to Finland!

You have some wonderful quilts as the result of your round robins! My life is so crazy I would never dare commit to something like this! But, I do like to participate in swaps where you send all your blocks to 1 hostess - that is low stress for me! Then again, come to think of it, haven't done a swap since my son was born - gee, I wonder why?!

I've participated in one row robin and it worked out OK. Not the best, just OK. I have my banner waiting to be finished. One of these I'll get to it.

I love your Round Robin projects. Very colorful.

Ooh, the one with the Australian hand-dyes just sings for me! (And of course, the others are lovely too, but they're not my own personal favorite, bright colors with black.)

(But I'm still not ready to take the Robin plunge.)

I have never done a round robin, but I'd love to try. Let me know when and how you get this going! Barbara Winkler, Bellflower, CA (barbcatw)

These round robins are really beautiful. I plan to do a medallion / ostritch round robin type quilt someday, but have to finish some UFOs first!