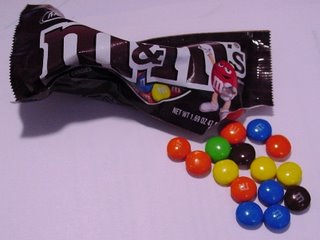 okay, no quilts in this post; it's time to reveal my m&m thing. possibly obsessive-compulsive, but I swear it's the only time I get this way (except for having to clean the house before going on vacation-- but everyone does that, right?)

Anyway, here goes. I've never told anyone before: I have this thing about the right way to eat m&ms. They have to be eaten in a certain order. First I eat all the brown ones -- just 'cause they're brown. 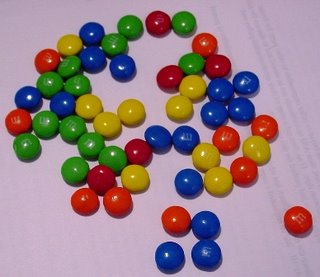 Then I figure out which color has the fewest and line the rest of them up so there are equal numbers of red, blue, yellow, green and orange. In this package, red had the fewest. 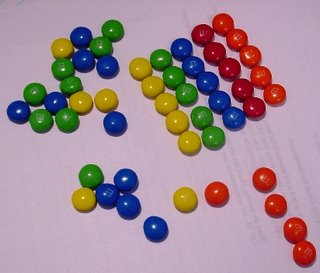 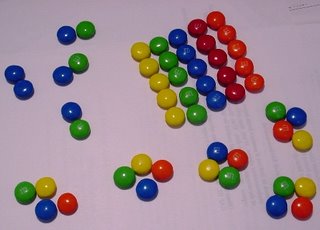 And then I eat them, starting with the smallest groups.

I've tried to figure out why I developed this little peculiarity and I think originally it was a means of not cramming them all in my mouth at once... i.e. making them last longer than 60 seconds. By the way, I only eat one small package a week!

I always buy a bag of M&M's when I get gas - so I eat mine in the car - good thing I don't line them up like you do! I only eat a few and then save them and before I know it - my center console has several 1/2 full bags, which Little Boy has discovered!

I pour all mine in a bowl and then seperate into colors. I then eat the ones that have the lease amount in the color and go up.

yes. i will still read your blog - because your post about m&m's is too funny!!

No doubt we all have some little idiosyncracy we could share.

I sort my M&M's by color and then make a trail of them in color order. Not always the same order, but in some order. So you're not the only one who does strange things with her M&M's. It seems there are a lot of us.
And yes, I will still read your blog.

We all have our little problems! Do you match the pegs to the colour of the clothes on the line?

Do you watch Monk??? What a stitch. If that's the worst thing you do, you're okay in my book LOL!

I eat all one color first - then the next. It varies - and not necessarily which one is least - but at the end I am eating all one color. With Jelly Beans I take out one of each color and eat just those - keeps me from over eating. Might be a Lazy Girl thing???

How funny - I do something similar - but only on occasion & only at the end of the package...

OH my.....that's really funny!
I've done this all my life so never thought about it.....and then my friend Peggy pointed it out and made my question my sanity LOL (I have other food idiosyncrasies too but that's a post for another day LOL

Glad I have an "M&M Sister out there"