Heavens, it's been forever since I posted. I wish I could say it's because I was so busy with the holidays, but really I was busy mostly avoiding them!

I told my youngest brother, who has 4 kids, that I was celebrating Twelfth Night this time instead of Christmas, since I just couldn't get myself together to shop/make/mail anything on time. Pathetic.  Once I told him, the weight lifted and I've been super productive, though. 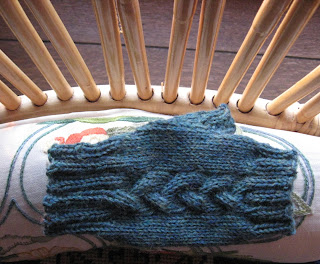 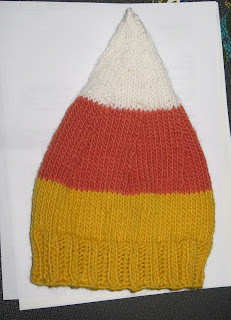 There are two hats done, a scarf, 6 flannel pillowcases, and one of a set of fingerless mitts.  What's left is one hat, one mitt, and a duvet-cover for my niece's heavy quilt. (by the way, she's slept under it every night for 2 years now...)  Photos are one mitt, and a Candy Corn hat, which I've been wanting to make for years.

I also made my annual batch of marshmallows -- yum!    And I'll have some quilting to show you shortly. 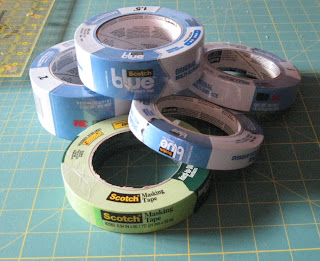 You can see that there's going to be some straight-line quilting in my future; I asked Al for a new roll of masking tape and this is what he came up with! One of each size...  what a champ!

Posted by floribunda at Tuesday, December 27, 2011

Is there an online source for the mitt pattern? I just love that cable.

and I thought that there was going to be some painting in your future....

Sophie linked to your blog as you made one of her blocks.... that quilt was wonderful and so happy that some lottoettes gifted her..thank you for your part.