Are you sick of listening to me whine? Good news, then -- I've stopped!

A couple of weeks ago I ran across THIS quilt idea for using a jelly roll or other 2-1/2" strips. Basically you sew all 40 strips together end to end, then fold the 1600" strip in half and stitch to the end and clip the end; then you fold the 800" strip in half and stitch, and so on. I forwarded the idea on to my mini-groups, and Catherine almost immediately sat down and made two tops: 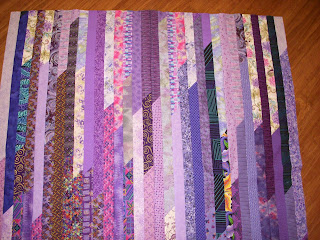 I think the second one put her over the edge, because the photo is kind of fuzzy... Mo likes it, though! 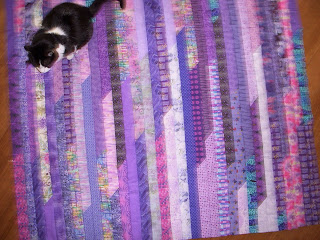 And then I got a wild notion (is it "hare" or "hair"?) and put this together last night: 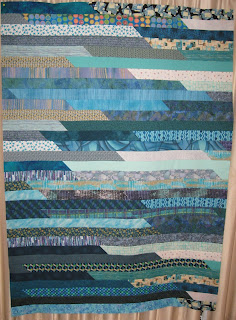 Honestly, I'm pretty ambivalent about it. I love monochromatic, but I'd rather have more control over the values and contrast. When you're putting this together it's hard to figure out in advance how the fabrics are going to line up...

My other mini group is planning to do this as a group project in a couple of weeks. We're going to each make a quilt using half shared black & white fabrics and half other fabrics of our own choosing. I'm thinking of heading in a bumblebee direction, but I haven't actually cut any strips yet.

And there's yarn action, too! When I started knitting socks a few years ago I heard about Cat Bordhi from Amy, who was in the process of trying out all of her patterns. They seemed very cool, so I bought the book but was too intimidated to do anything with it. Just recently, Suzanne knit a pair of Cat's socks and we chatted (virtually) and decided to maybe do a knit-along this summer of one of the patterns. But first I decided I had to dive in and make sure I understood the thought process... 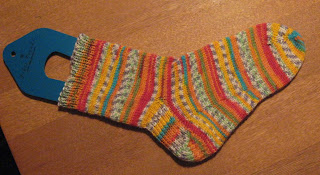 This is my first Cat Bordhi sock -- it's the basic "Riverbed" architecture, which is a toe-up sock that has increases running up the sole rather than on the instep. The socks fit perfectly but they look very odd when they're not on a foot. I had never done a short-row heel before but after ripping it out once because I forgot the side increases, it worked perfectly. I don't like the yarn -- it's DK weight rather than fingering, and that makes a sock that's too heavy for my taste. The reinforced heels are insanely think and I'm not sure they'll fit in a shoe! But I'm glad I did it, and I definitely feel more confident about moving on to other patterns from her book.

I love your colors. I found the same pattern online and couldn't resist. I've made one, started the second. I think for the third I'm going to try to kick it up with some the machine embroidery designs I've purchased. This quilt works for me because it's just mindless sewing and I need that some days after working 8 hours and dealing with family stuff.

That looks like an easy quilt. I may have to buy a jelly roll and give it a try...

I saw the Jelly Roll Races video and thought it would be a great way to make donation quilts. Next week my guild is doing just that at a worknight after cutting strips from kid-friendly fabrics. I love some of the quilts made this way, but others not so much. I agree with you -- lack of control over placement means you rely on serendipity. The black & white plus your own color sounds like a cool idea, and I'm eager to see how those turn out.

Love the jelly roll quilts. I think the unplanned-ness is part of their charm, and they are sooo quick! And your sock is beautiful. Can you wear them as slippers?

I have the same issues as you with lasagna-type quilts -- I just like more control over what goes next to what!

But I really love the quilts you've shown, and I especially like the mitered seams -- a lot more than when they're done on the straight.

This is a pretty nifty technique. I think it'd be great for backgrounds if you want to make large dresdens or another large applique' over it.

YOu know the yarn I said I was going to use for our knit-a-long? Yeah. I used it on something else, LOL-- I made the SKy socks. Like the riverbed socks, they do look goofy off my foot, but they definitely fit nicely. And although I've done the reinforced heel twice, I'm going to go plain next time.

But I still want to do the Coriolis as a knit-a-long...I just have to find some yarn for it...darn...yarn shopping... :)