About 14 months ago, a group of 15 of us started up a different kind of round robin, following a technique that MayBritt had blogged about. The process went exceptionally well, with just a little bit to do most months, and very few delays. And today my quilt came home! 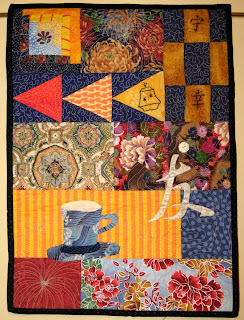 My original block was the orphan in the upper left corner; the quilt includes some applique, some embroidery, writing and buttons, and lovely quilting. You can see another quilt from the group here, and more should be popping up in blogland soon!

In other news, after making all those hats before Christmas, I decided I needed one, too -- I've never really worn wool caps before, but the cold (and my cold, which lingers) has been making my ears hurt. So, out came the stash and this little ribbed cap was made in just two nights:

I decided to join in on Quilt Pixie's Friday Block Party, to try to use up my bin of batik scraps. She's compiled a list of interesting blocks from Quilters' Cache, and will pull one out of the hat every Friday and post it to the group. It's not too late to join in... 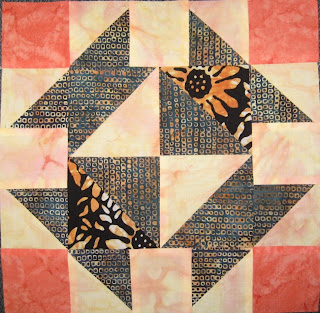 And last but not least -- it's Rhino season! I finished the little embroidery that had been languishing in my knitting basket for some reason. I have a bunch of rhino-esque textile things around that will end up in a quilt one of these days, I think. 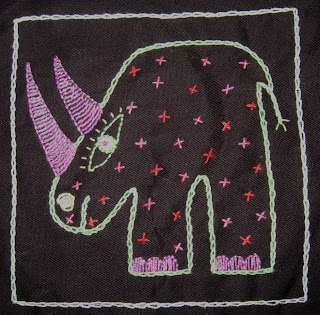 How fun to see :) We had great fun sewing these when we did the RR.

Your rhino is adorable! And I love how you display your hat -- way to warm you up outside AND inside!

Was your round robin done row by row horizontally?

EXCELLENT block and really excellent rhino! I'm looking at the RR and can't remember what part was mine!

word verification: cahst which I believe is how New Englanders do fly fishing?

I like the little stitched piece -- I'll be looking forward to seeing a rhino quilt :)
Jeanne

I love that rhino! I've been saving some of my son's drawings this winter... I am thinking of embroidering some of them into pillows - your rhino inspires me to at least try!
Cheers! Evelyn

what a character! Wouldn't want to meet that Rhino on a nud road near the riverbank! :-) He's beautiful, but strong looking...

I'm impressed! And who knew that wine bottles wear hats? ;)

All of that stuff looks really great! I wish I was feeling half that productive these days! :)

Julie,
That is one interesting quilt you got back in the end of that swap. I think the girls that did it with you are very creative!!!
Peggy