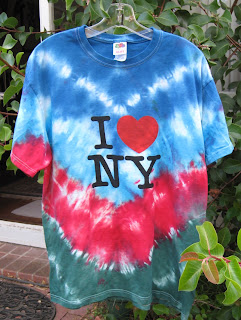 Blogger is being a total pill this evening -- and just when I have a bunch of photos from the weekend. After several tries it let me upload one picture. Now it gives me error messages when I try to add more. Waiting for blogger.com... server error 500.

Anyway, inspired by Vicki, I decided to try my hand at tie-dye with one of my little quilt-groups. I know it's hard to believe that despite growing up in Berkeley in the 60's-70's, I had never done this before! I did do some batik, some candle-making, and a ton of macrame' though.

This is a t-shirt I won recently. It was really, really white -- and I never wear white! So I brightened it up just a bit. I originally thought it would end up being something to sleep in, but now I think it might keep me awake.

I thought maybe blogger was going to let me add another photo, but apparently not. Stand by for more dye jobs!

I love it! Much better than a white shirt and it really wants to be wore out in public.