new bag, and the continuation of the story

First, here's the latest bag -- this one's for me, and it's the X-Bag pattern from Four Corners Designs. Again, the instructions/illustrations aren't the best... but it makes a nice purse in the end. The fabric is a new line from RJR/Jinny Beyer, called "Mariposa". There are some beautiful colors, and I especially like this because it has some body to it, unlike a lot of the Jinny Beyer stuff. 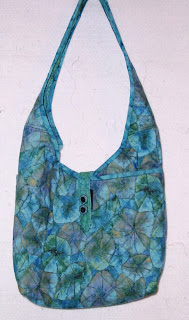 I was asked about my quilt-mailing saga from a little while back. The funny thing is that once I had the tracking number, I immediately started tracking... and it kept saying "it's arrived at the unit in Upland, CA" and we can't tell you anything else. Hmm. Gee, guys, that really makes the $42 shipping charge worthwhile, when you can't even tell me if you delivered it! After a few days I called the quilt-show office, thinking perhaps they had asked the post office to just hold all the packages until the day of the deadline -- but no. She told me they HAD received it. So that ticked me off even more about the post office's tracking system. Now, two weeks later, they still can't tell me they've delivered it! I thought about calling and making a fuss, but their phone system is just too daunting to deal with.

This other photo speaks to how I've been the last few days... oversleeping like crazy! This was a little mystery block from Paper Panache a while back. I call it "cranky alarm clock". This morning I slept through the clock radio playing NPR loudly for almost two hours! That's what happens when my husband is out of town... I tend to stay up later and oversleep every day. I'm very good at taking a shower and getting out of the house in 20 minutes, though. It's very cold here in the SF Bay Area this week. They were even talking about snow, but since there aren't any clouds, I don't think that's going to happen. I'm thankful that my back yard is very sheltered, though, since the orange and lemon trees are loaded with fruit.
Posted by floribunda at Friday, January 12, 2007

I love the alarm clock. Is it your design and is it paper pieced? I also love the bag. I can't stop making bags although I have dozens of them.

Nice bag. I've thought about buying the x-bag pattern. Knowing about the instructions though I might not. That's why I love LGD patterns...Joan has great instructions!

Cute block too. I haven't been to her website in a longgggg time. I should go look around.

What a cute bag!

I'm headed to Road to CA on Thursday. I'll keep my eyes peeled for your quilt. Did you ever post a pic of it so I know what I'm looking for?

It's cold here in Houston this week too.

I hear you on the alarm clock. I totally missed it a few mornings this week. I have to change the CD because I am tuning it out.

I love the color on your purse - looks like a great pattern, if not great directions. The "clockwork orange" is super, too. It has such personality!

I didn't even know citrus would grow in the SF area!

How cute, and what a surprise it must have been seeing that little face appear.

I've bought that bag pattern to try - I hope that I can follow the instructions. It looks like a great bag though. ( my colours too)

Love your cranky alarm clock - I can relate. I set 4 alarms to get up every day, and they have snoozes on them too!

That cranky alarm clock is funny. I've got to get with it and take a paper piecing class.

I keep watching the news about all the frozen oranges in CA, and the snow in Texas. Amazing. We don't have anything yet in Ohio, snowwise. That is an interesting alarm clock. Really like the bag.

I see the underside of a spider handing off a spider web! Very cool! I love it!

I love him! Very Alice-in-Wonderland-ish! And I love the border fabric.