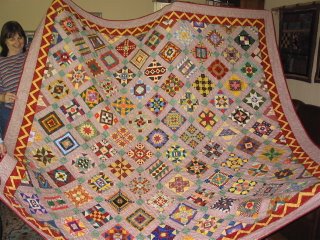 Okay, first let me mention that the Nearly Insane is done -- got it back from the quilter 10 days ago, and put the binding & label on last weekend. I love the quilting that Denise Fabel did, just a loose swirly freeform design. Here's a picture of one detail, although I'm not sure if the quilting will really show up: 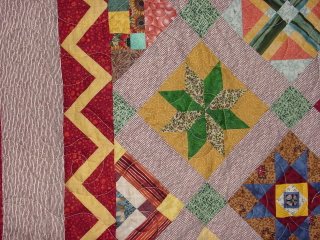 So anyway, Evelyn sent an email & in it asked if I missed working on it now that it's done. And I realized that I DO. Not so much that I miss the particular quilt, but that I miss having this one Big Project sort of in the background behind all the other quilty stuff I work on. And I've been thinking a lot of about what sort of Big Project I want to do next.

I bought a couple of complex patterns from BeColourful and one of those might do the trick -- have you seen them? http://home.casema.nl/becolourful
One is in Dutch, so I get the thrill of trying to translate it along with the quilting itself! I believe it's the designer's sister who handles the correspondence, and she was terrific to deal with.

Here's one more picture (why not) of a little wall-hanging top I did recently as a Cyberquilters weekend project -- it's called Hidden Wells. 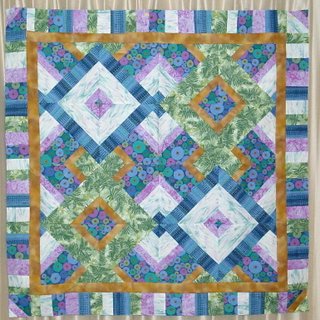